We buried Estella on Friday. Mike delivered a beautiful eulogy that would’ve been inspiring even to those who had never met her. We’re all very proud.

I was honored to accept the request to be a pallbearer. Once we brought Estella to her final resting place, we shed our gloves for burial. I also left her a crisp copy of The Dolphin’s Secret. 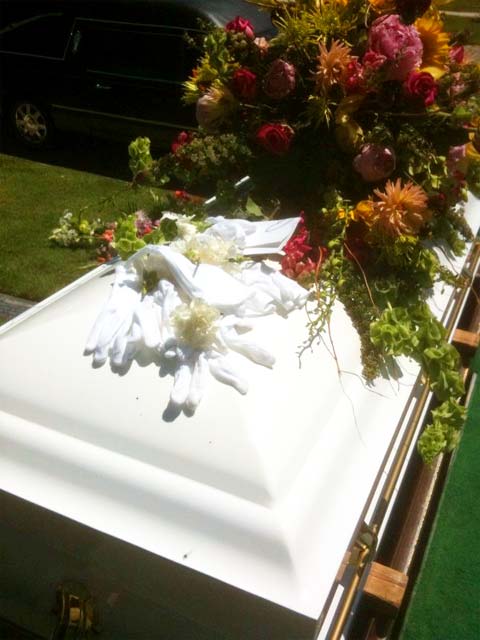 Interesting note: We’ve had quite the June Gloom in SoCal this year. More than usual. Once we finished the short ceremony at the grave, the sun came out and began beating down, as if on queue. It was enough for a few of us to comment, and most of us started taking off our coats. Couldn’t help from feeling as though the summer was finally beginning, at that exact moment. A literal change of seasons.

*UPDATE* Her eulogy, as written and delivered by Mike:

For what is to die, but to stand in the sun and melt into the wind? And when the Earth has claimed our limbs, then we shall truly dance. That’s a quote from Kahlil Gibran that I recently read and know my mom would have appreciated.

Being her youngest child and only son, I was often spoiled by generosity. The irony was that being spoiled by her love made me a more grateful and down to Earth human being in every facet of my life. She taught me it was better to give than to receive. And she always told me to slow down and try not to let life stress me out. It took me a few years to get it…and I’m still struggling with that, but I’m beginning to figure it out and understand what she meant. She loved the little things in life that many of us take for granted. Taking drives to search for wildflowers in early spring….good food and conversation with friends and family….

Estella Frances Gonzales Naylor van Hoorn, AKA Stel, Stella, Nina, Estellita, Hermanita, Mama, Ikibana Mama, Mom, and Mommy’s Mommy and Grandma, was an amazing woman, as her many and varied names suggest. She used to say that when she died, her epitaph should read: “She tried.” Well, Mom, you did more than try—you succeeded.

You succeeded in rising from your humble beginnings, born in the small mining town of Santa Rita, NM in 1931, during a depression with seemingly no end. You were a loving big sister to Laura when she was born, and while you were sick quite a bit when you were young, you turned the time in bed into your reading years, developing a love for literature, arcane words, and twists of phrase which was never ending.

When you moved with your parents and your sister (whom, by the way, we affectionately call Nani) to California, you succeeded academically at Manual Arts High School and later Immaculate Heart College, making you the first in the Gonzales family to earn a college degree.

You garnered long, enduring friendships in your 20s, with friends here today including Peggy Moran, Celia Merrit, Mary Levy and Camille Watts, and excelled in your first job at an aviation magazine in Los Angeles. You knew how to embrace life early on, jetting off to Europe with Auntie Peggy in 1957, for a tour by Fiat convertible. And I’m sure you two young beautiful American women travelers caught the eye of many on your adventures.

However, it wasn’t any Italian or French playboys that you fell for, but instead a handsome Brit named Geoff , our Dad, whom you met at an Irish Catholic dance in Los Angeles a few years after that European excursion. You cultivated many friendships during that time with other couples who found their way to San Pedro from a variety of geographies—they included Ann and Johann Bu, David and June Kennedy, Joyce and Arnie Ulstrup, and our beloved next door neighbors from Roxbury Street in San Pedro, Jeanette and Kenneth Craig. You created many happy memories of shared dinners with this extended family, and went along with Dad’s desire to travel, even after Mary and Katy were born. They still remember the sojourn to Europe in 1968, which included cruising by boat to Greece, as even Russia, in a time when very few Americans, let alone children in Brady Bunch looking fashions, were see in the USSR.

You were a stellar international businesswoman, who brought Avon product by the dozen to crew members aboard the many tankers pulling into LA Harbor in the late 60s and 1970s. Avon even named you their top saleswoman in your region on many occasion, and you parlayed your friendships and sales knowledge into the expertise needed to co-run Standard and Hall Ship Supply for 22 years. And it was during these decades working with foreign ships that you also took personal interest in the Captains and crewmembers (and their families) often inviting them over for dinner to our home on Summerland Street. These dinners were sometimes represented by guests from several different countries. And, me being a young man at the time pictured these guests as intriguing Sultans, barons or adventurers from foreign lands. Your dinner parties were fun….and you really showed off your culinary talent! But after the fondue pot, wine glasses, and party plates were put away it was back to work. …to earn a good living and care for your children.

We remember you working long hours at the office, and often at home, huddled over a calculator or working on an invoice on the typewriter, or calling in an order for a ship. Yet you always managed to be there for the nursery school drop off or soccer match, seeing the caught ball at a softball game from the bleachers, or taking us to piano lessons.

Despite the difficult times that struck, you always maintained a positive attitude and equanimity which came to define you. You had many pursuits outside of work—somehow, you found time for piano playing, flower arranging, guitar strumming, tango lessons, and, for falling in love again. With Gus, with whom you enjoyed a cornucopia of rich experiences—from riding camels in a desert in China, attending a family wedding in Australia, visiting your dear friends Mustafa and Sevgei in Turkey, and Gus’ many relatives throughout the Netherlands.

You later happily served as master chef, diaper changer and nursery song crooner when your grandchildren Devon and Ian were born. They know how lucky they were to have such a loving, fun and interesting grandmother.

You were unselfish to the end, and somehow hung on to life, giving all of us many chances to have conversations never had before; long lingering uninterrupted bedside visits with you, while all along you probably would have preferred a fast express train north to the heavens above.

So Mom, while you think your epitaph should have read: “she tried.” It really should read: “She succeeded.” When it came to raising a family, running a business, and creating long-lasting relationships you knew what you were doing. In the end, you succeeded in being completely surrounded by love—the most important thing in life.