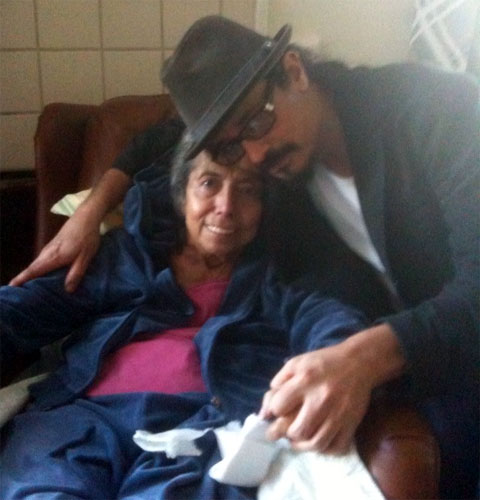 Saturday was a great day. I finally had the opportunity to visit my buddy Mike‘s mom, Estella, a woman I met over 25 years ago when Mike and I were in junior high school. For the past year and a half, Estella’s been trooping through an ordeal that put her in the hospital for months on end starting in May 2008.

Last summer, during the worst of it, Mike and his family spent each day reading to Mom from books and magazines. She eventually became disinterested with the material, so Mike broke out his iPhone and began reading some of the short stories that I’ve written and posted on this site. The first one he read for her was The Tail of the Bored Peacock, a piece I’d finished and read to him out loud while he was over at the house during those opening weeks. He called me after he read Peacock to his mom, and described her reaction. Hearing this was the most rewarding feeling I’d ever experienced from my writing.

As those summer weeks rolled on, Estella was requesting more of my stories. Mike dug into the archives and went through nearly every piece, reading one to her each day, and then calling me from the car on the way home from the hospital to describe her reaction. This daily base-touching became a bit of a routine, and will be one of the first things I’ll always remember about the Summer of 2008. Hearing from Mike each day was always something I’d look forward to.

One day, after months of daily hospital visits, Mike called to tell me that they’d read everything. “We need more stories!” he told me. I remember thinking, wow, there’s actually a demand for this stuff. Inspired by Estella’s request, I revisited a little story idea that’d been swimming around in my brain. I daydreamed about it for a few days, letting it find its own conclusion. One morning it finally broke free, so I sat down and got it on paper, dubbing it The Dolphin’s Secret.

I floated the piece over to Mike. One of us — I can’t remember which — suggested that I should be the one to read it to Estella, as it was something she and I shared on a level that can’t be described. We penciled in the idea of me visiting her to do so, but the health conditions escalated, and we ultimately put the visit on hold for over a year.

Mike never read it to her.

She’s doing fairly well now, and is out of the hospital, resting in the comfort of her own home. Last week Mike and I both decided that now’d be a good time, so we hashed out our schedules and set up a time for me to stop in for a quick 30-minute visit.

It was a genuine treat to see her. I brought a printed copy of the The Dolphin’s Secret for her to keep. After a few minutes of catching up on life’s basics, I told her what an inspiration she was, and how this story would not exist if she hadn’t given me that extra nudge to take an idea and finish it off.

Like a stage director, she replied, “You’re on, kid.”

She loved it. I could see her eyes anticipating the ending, and watching her reaction as I read the payoff was one of the most beautiful experiences I’ve ever had. Afterward, we talked a little about what the story means, which I’ll leave out of this post.

We then talked a bit about storytelling, and what stories do. She explained to me how, during the major ordeal last summer, she was forced to “turn off” her mind, almost like a prolonged trance, in order to endure what was happening to her body. She told me that when Mike would read her my stories, she could feel her mind being stimulated, fed, allowing her to go to different worlds.

We talked a bit about what I’m doing now, including the project I’ve been doing for 2009, and we discussed the creative process in general. I described how story ideas develop in my mind: they start with directionless seeds, chaotic, without structure, and are almost like bothersome webs of spaghetti that need to be untangled in order to share with others. Her eyes lit up as she recalled something she remembered Tim Burton saying, remembering how he described his ideas as “meaningless squiggles” that need to be sorted out in order to make sense of them.