Commercial at White Point the other morning

There are few places in the world I would rather wake up in than San Pedro, California. We have the most beautiful mornings here. And our sunsets ain’t too shabby either.

Here’s a good example of some of the trippy moments that happen down here at our little hideaway at the edge of the earth. Being so close to Hollywood, it’s common for us to spontaneously cross paths with production teams taking advantage of our epic terrain to shoot films, television shows, music videos, and commercials. The other morning the dogs and I head down the hill to do our morning business at one our favorite neighborhood hangs in the rotation, White Point. There was a HUGE crane set up on the bluff on Paseo Del Mar, sparking my curiosity. I pulled in to the parking lot to do a U-turn, and schooled the security guys as to what was going on. They told me there was gonna be a commercial shot that morning.

We parked at our usual roadside spot, walked out to the edge of the cliff, and saw a second crane down on the beach. I wonder what they were doing. Click the image for a larger version. 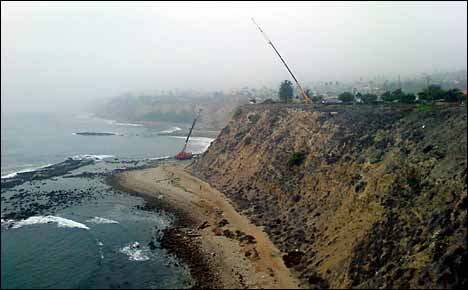 Royal Palms is the next cove over. Trump’s is barely visible in the fog.

Previous post: The worst “Who Wants to Be a Millionaire” contestant ever