Naylor’s been crashing at the house for the past couple and a half weeks or so. It’s been nice to have the company.

He’s also taken on the role of a consultant. Last week I took a page out of his book and have started to discover cooking. As with all the other unfamiliar household things I’ve been diving into this year, I’m learning that if you can take a household chore and turn it into an art project, I’m totally game. The kitchen jam is a whole nuther way to get your zen on.

Last night after grub, my consultant finally cracked, introducing some much needed blatantly honest objectivity about what has happened to my surroundings. I’ve been gradually knocking out the little things in the last year like, say, demolishing walls, framing soffits, building lattices, wiring Media Closets, and tonguing and grooving with Binary Floors, but I seem to have overlooked some basic things. Like, you know, OPENING THE CABINETS AND NOTICING WHAT’S INSIDE THEM.

The closets, cabinets, and drawers of the house have been train wrecks since before this day. I mean, really bad. It’s not anything I haven’t known, it’s just that I haven’t put it on the To Do List until last night.

Mike began with the “pantry” in the hallway. In it, in no particular order, remained items that I never personally put in there. It was riddled with everything from expired dog treats to vacuum cleaner bags to red vinegar to rice pilaf to three half-full bottles of Windex to a can of Trader Joe’s pumpkin olive chutney extract. Absurd. The first course of business was to empty the thing out, box up the pointless items for the food drive bin, and consolidate everything else to bring into the kitchen. We then designated that pantry to be the towel closet, freeing up the old towel closet for bedding stuff, which will in turn allow me to get rid of a dresser in the bedroom.

My consultant then took a long look at the kitchen and its cabinets. Again, a disaster area. The cabinet to the left of the sink was a cross between a medicine cabinet, a junk drawer, a tool chest, a place to stockpile receipts, and a spare area for glasses and mugs. The cabinet to the right was more of the same, but included plates and bowls, seven chopsticks, about thirty-nine pairs of wine glasses, a tape measure, and a Philips head screwdriver. Then there was a quasi-spice cabinet that couldn’t figure out what exactly it was trying to be.

We emptied those three cabinets out first, and designated shelves for focused purposes. Spices, herbs, and oils on one, a shelf for carbs like pasta and rice, a booze shelf, a designated dog section above the laundry area, and a Coffee Corner for all related paraphernalia.

We also moved the dinette set over the threshold into the kitchen, opening things up even more. That’s where it needs to be. I have no idea why I didn’t realize that earlier.

The next thing to address is the drawer situation, which is frightening. I’ll probably wake a few silverfish and spiders in the process. It’ll be the same drill; empty everything out of about a dozen drawers, figure out what I want to keep, consolidate it all into about three drawers, and then figure out what happens next. I also want to print out some artwork to line said drawers and the cabinets.

New leaves are a’turning. This is getting pretty nutty. Who’da thunk it? Between remodeling, carpentry, painting, and cooking, the next thing you know I’ll be cleaning the bathroom. Or even making a salad.

By the way, here’s an early peek at the Binary Floor after two coats of Varathane. Two more to coats to go, to be finished by this weekend for the Fourth. TIGOLE BITTIES. 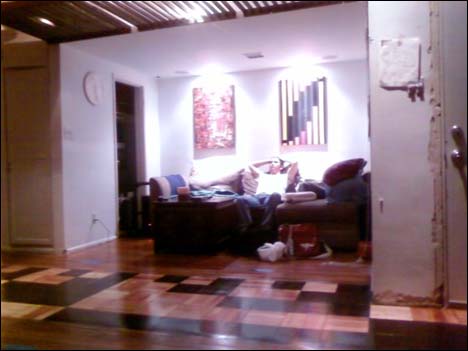