Aced with Angels: An Interview with Jace Daniel

The following interview was conducted by Anthony Smits at Crimson Soapbox on October 26, 2011. 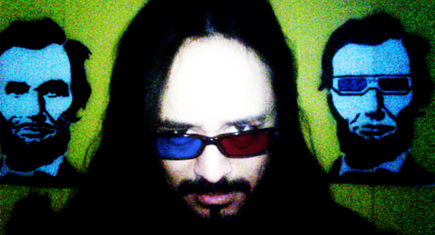 Aced with Angels: An Interview with Jace Daniel, the Author of Under Angels

Just in time for Halloween, Crimson gets the raw from author Jace Daniel Albao, who says he has an insatiable craving for words.

Jace is an artist, drummer, and writer, residing in Los Angeles.

He enjoys watching movies worth watching and telling stories worth telling, and has recently written a novel and screenplay called Under Angels. It seems Jace also shares my love for chocolate, and reckons it’s true that life does begin at forty. What more’s to be said?

Interviewers have been impressed with Under Angels:

And another, who was obviously lucky to get out from under the pages alive, said:

“I read the book in one day, forsaking all others, until the early evening found me at the finish line with tears and a powerful desire to read everything this man has ever written, whether novel or notes on a pub napkin.”

Which begs the question: Who is this writer, that he can do what we all dream of achieving, which is to so affect our readers that they cannot stand afterwards?

He is Jace Daniel Albao, who resides at http://jaced.com. He’s one of The Authentic at Crimson.

Is authenticity in writing the whole of the game?

“Never underestimate your readers. Even if only on a subconscious level, a good reader can sense when something’s real, and when it isn’t.

“Keep things real. Authentic. Humans react to honest writing, whether it’s packaged as a literal expression or delivered through abstraction and metaphor.

“If it’s not real, the reader will feel it, and react accordingly. They’ll put the book down and forget about it. That’s what I do, anyway.

“I just jam. I try not to over-intellectualize, which is a discipline that has taken me years to get a grip on. Once you start thinking too hard in an expressive art form, your stuff becomes artificial, manufactured, and not truly yours.

“When I write fiction, if I’m lucky, I’ll eventually reach a certain zone where the stuff just starts flowing. I’ve found that when I’m not in that zone, I’m either too busy thinking about it, or the story simply needs more time to incubate and find itself in my mind. Those are the days where it’s best to just back off and take the dog out for a walk.”

“The writer with the strong voice is the one that gets the floor. And anybody who has something to say wants the floor.”

I had to smile when Jace started to talk about the importance of structure. On the Soapbox at Crimson, we’ve identified structure and voice as two equally important pillars in a body of writing. Broadly, structure is the bones and everything else is the artist’s creativity. One is no good without the other. Jace agrees.

“Note that curbing your tendencies to intellectualize doesn’t necessarily mean you should be ignoring rules of structure, outlining, etc. Quite the contrary. I think it was McKee who warned us that the desire to be free is one of the most suicidal thoughts we could ever have as artists. We in fact do not want to be free. Instead, we must aim to spread our wings within the boundaries of strict limitations. That’s where the magic happens.

“It’s been said that rules were made to be broken. That’s only half-true. Interesting effects can certainly be achieved by breaking the rules, but only after you’ve mastered said rules in the first place. Anything else is just hacking.

“And hacking has nothing to do with keeping it real.

“As for what sets me apart from my peers, the answer is probably less about how I write than it is about who I am. I’ve been told that I see the world from a different angle, and who we are is inevitably reflected in our writing. Our writing is an extension of ourselves.”

Authenticity comes from within.

“My biggest struggles have probably been in situations where I’m serving as copywriter for a larger company that doesn’t know what they’re trying to say. Those types of situations result in lots of back-and-forth, and can quickly get to a point where making the client happy is a higher priority than making the stuff good.

“This kind of situation’s not good for your sanity, especially if you’re the kind of person who takes pride in doing quality work.

“There’s nothing more effortless than jamming out a story that’s been incubating for a while, and is screaming to come out. It could be a short story, a novel, or even a tweet. The best stories tell themselves; it’s almost more a process of discovery than invention.

“Sometimes I feel like I’m just a faucet, where all I need to do is crank the handle full blast and release the stuff into the world. Those are the best days.

“Conversely, there is no more painful experience than harboring a story inside of you that needs to be told.”

A letter from a Character:

When asked about the relevance of an author’s moral views in fiction, Jace said the question reminded him of a ‘quick jam’ he penned a few years ago:

“Dear Author of My Existence,

“You’ve not yet met me, yet you know me better than you know. I am the face you see in every crowd. I am the voice you hear in your head, barely identifiable behind the noise. I am what you love to hate. I am everything you hate to love. I am the truth of your falsehood, the contradiction to you solution. I am the source of your something. I am your greed. Your patience. Your craving. Your repulsion. I am your appetite and your sickness. I am your dead-end, more than you’ve ever been. I am your idleness, your energy. I am the epitome of your potential, the manifestation of your impossible. I am your shame and pride. I am your tool. I am your coldest fear. I am your strength and stamina. Your hope. I am your your grudge, your envy, your malice. I am your unselfishness, your charity. I am your kindness. I am your heart.

“My requests are simple: Do not do me injustice. Do not mistake fact for opportunity. Do not resort to gossip for entertainment purposes. Do not sugarcoat. Do not embellish my story to suit yours. While my existence is indeed dependent on you, never forget that you only exist because of me. Consider us even.

~ The Character You Have Not Yet Named”

Where does writing success come from?

“The most important part of writing is writing. Somebody once said, “Writing begets writing.” It’s true. A related quote goes something like, “Writers write. Dreamers talk about it.” There’s nothing truer.

“Skill is undoubtedly important. Skills can be taught. Skills are quantifiable. A person who types 95 wpm with zero mistakes is an objectively more skillful typist than the person who pecks out 38 wpm with 15% mistakes.

“However, there are more important things than skill. Things that can’t be taught. Things we’ve already talked about, like voice. Like authenticity. Like striking a nerve with people and driving them to laughter or tears. Making the hairs stand up on the back of their necks.

“Having something to say as a writer — something that touches people — is arguably more important than the writer’s measurable skill.

“Take Henry Charles Bukowski, for instance. His stories and poems move people in ways that few other writers do. He has a voice that is distinctly him, with a cult following in all corners of the globe. But, face it, mechanically speaking, he was a crappy writer. Very punk, if you will. His command of language was subpar, but it didn’t matter. What he was saying was louder and more important than how he was saying it. Underneath all that literary slop is something very real, and something that can’t be measured. It can’t be taught.

“I suppose the same thing can be said about Kurt Cobain. Crappy guitar player, when you get down to it. But it was never about his guitar playing.

“It was about the songs. They’re magic.”

Jace Daniel is the author of Under Angels, a supernatural thriller also available on Amazon and Smashwords. Under Angels is available in all ebook formats including Kindle, NOOK, iBooks, Kobo, and others.

Be sure to join the Under Angels Facebook page at http://facebook.com/underangels/

Get scared, inspired and find links to get your copy at: http://underangels.com

Next post: Blind Great Dane and her own seeing-eye dog Maddison