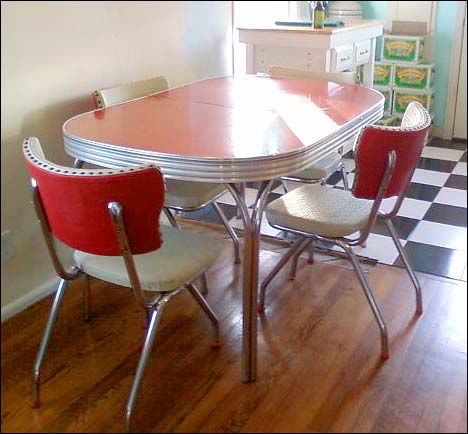 So until I get a bar, I need some sort of kitchen/dining table situation, if for nothing else than stacking mail on and hanging underwear from. I woke up New Year’s Eve at about noon and turned on the TV to find the Twilight Zone Marathon underway, and got inspired to just go with that vibe. I’ve always loved the mid-century Americana flavor that punctuated the show’s sets, so I hit craigslist and found this little gem. Figured it’d be a natural complement to the 1945 California bungalow, and the kitchen’s already got a bit of that retro soda fountain thing going anyway.

Going ’50s is really just an extension of the huge crush I have on vintage mid-century American-made drums and their classic finishes. (I must remember never to take up bowling seriously. I’d surely end up collecting vintage bowling balls.)

This baby’s the real deal. Not a reproduction. The tabletop is Formica, with a finish they called “Cracked Ice”. These sets came in all the primary colors. Mine’s got a red/orange thing going, which is right up my alley. I tend to grab those colors often when I’m at the canvas. It also came with two extra leaves. Leafs?

Rapped out for a while with the knowledgeable seller up in Culver City, who used to be an antique dealer. We talked a bit about the mid-century trends, and how they evolved after World War II, to the Cold War of the ’50s, through the Space Age of the ’60s, and on to the horrifically hip trends of the ’70s. The ’40s stuff still echoed much of the Art Deco stuff from the ’30s, whereas the nuclear ’50s brought us lots of chrome and primary colors (Red, Yellow, Blue). The ’60s deviated from the primary colors, getting more into the turquoises, purples, pinks, pastels, and earthy tones. The funky ’70s took the earth tones even further with all the rusty mustards, mauve taupes, and Brady Bunch avocado greens. Then the ’80s went neon, but we’re probably better off forgetting that ever happened.

Now I just need some chrome polish, a load of elbow grease, and a cute waitress on roller skates.