We’ve watched grotesque amounts of Flea Market Flip in recent months. The resulting effect is that I now can’t look at everyday objects without imagining how they might be refurbished, reimagined, and repurposed.

I’ve also been getting inspired by these guys who’ve been assembling “suitcase drum sets“. You’ve seen them; small makeshift kits with a suitcase used as the kick drum. They’re portable and comparatively light, making them perfect solutions for intimate gigs, small rooms, and busking. They’re also green, giving you a way to make use of old shit you’ve had laying around for years but haven’t had the heart to toss out. There’s always a special kind of satisfaction in that. For me, anyway. Something I got from my dad.

Perhaps the most appealing thing about these suitcase drum kits is that they’re self-contained, allowing you to store and transport AN ENTIRE KIT in the case itself. Drums, cymbals, hardware, everything. Some guys will build a bigger kit than can fit into the case, but that’s defeating the purpose IMHO. Part of the challenge — and fun — is assembling just the right amount of percussion and hardware that can fit into the chosen case.

So I saw this on craigslist here in the neighborhood and grabbed it. A vintage footlocker/chest: 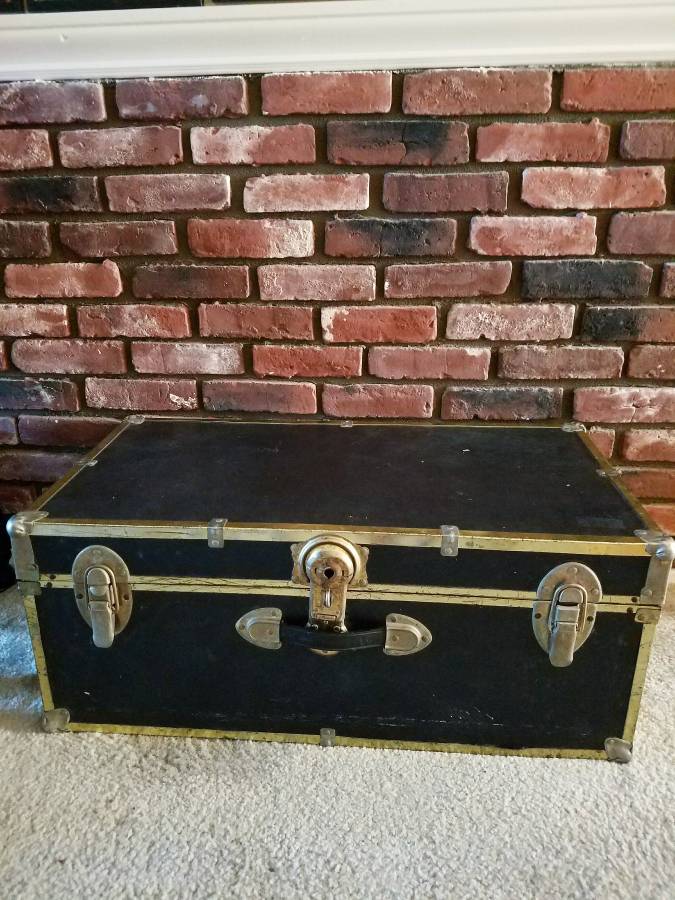 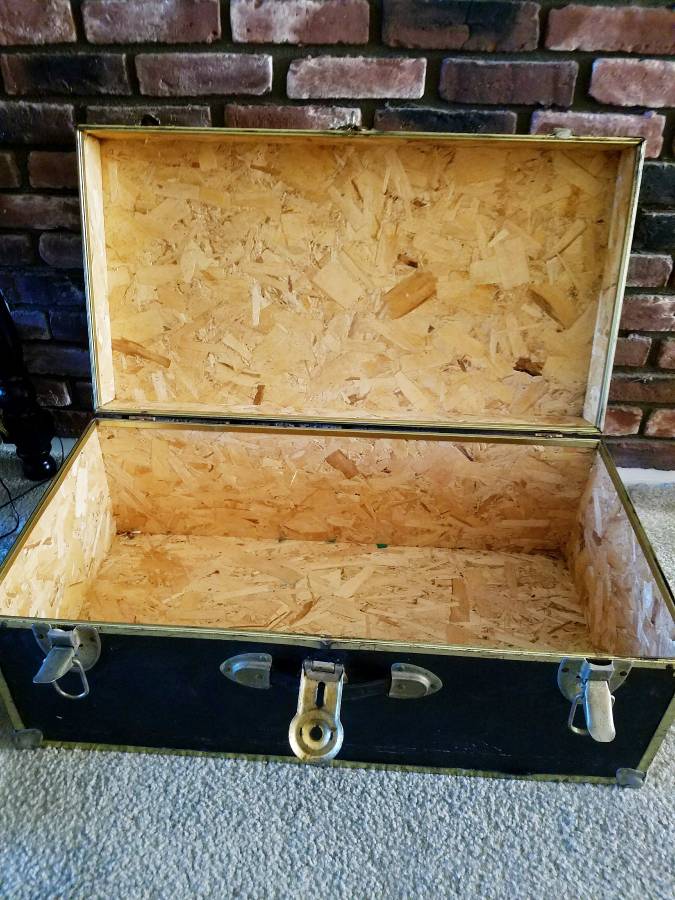 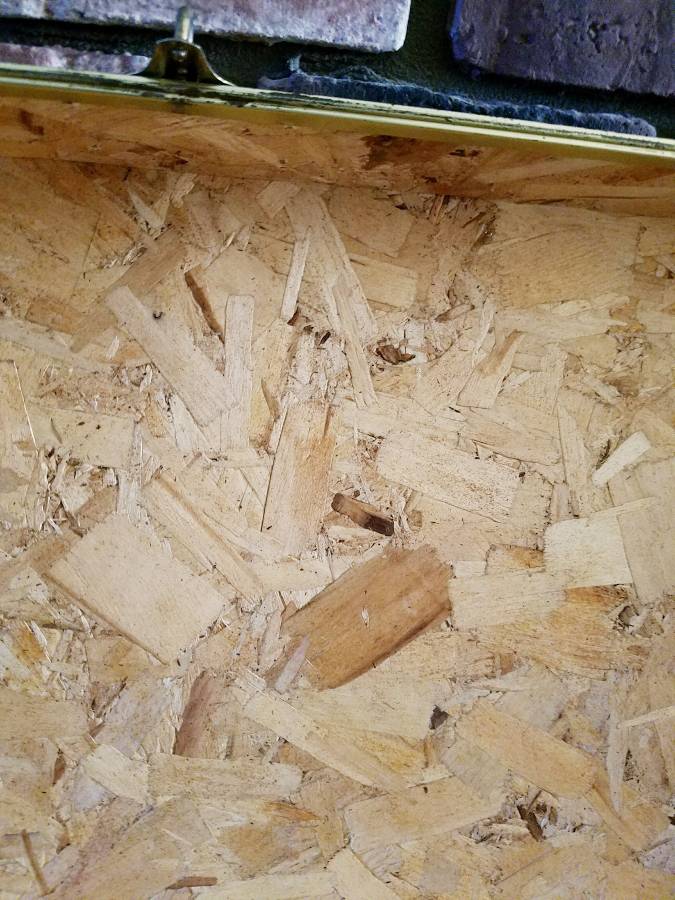 What struck me was that, unlike your conventional Samsonite-style plastic suitcase, this thing was wood. I love the low-end thud of my cajon, so I figured if I could get a similar tone out of this thing, I’d be in business.

The first step was to see how it sounded as a kick drum. I put a cajon beater on an old Pearl 880 kick drum from the eighties and gave it a try. (ANECDOTE: This was one of two pedals I bought on the Recycler, a California classified newspaper that came out every Thursday. I remember going to this elderly couple’s home, who said that their son was on the way over with his girlfriend. I hung out with them for a few minutes before the guy showed up with the pedals. It was the drummer from a band called Great White.) 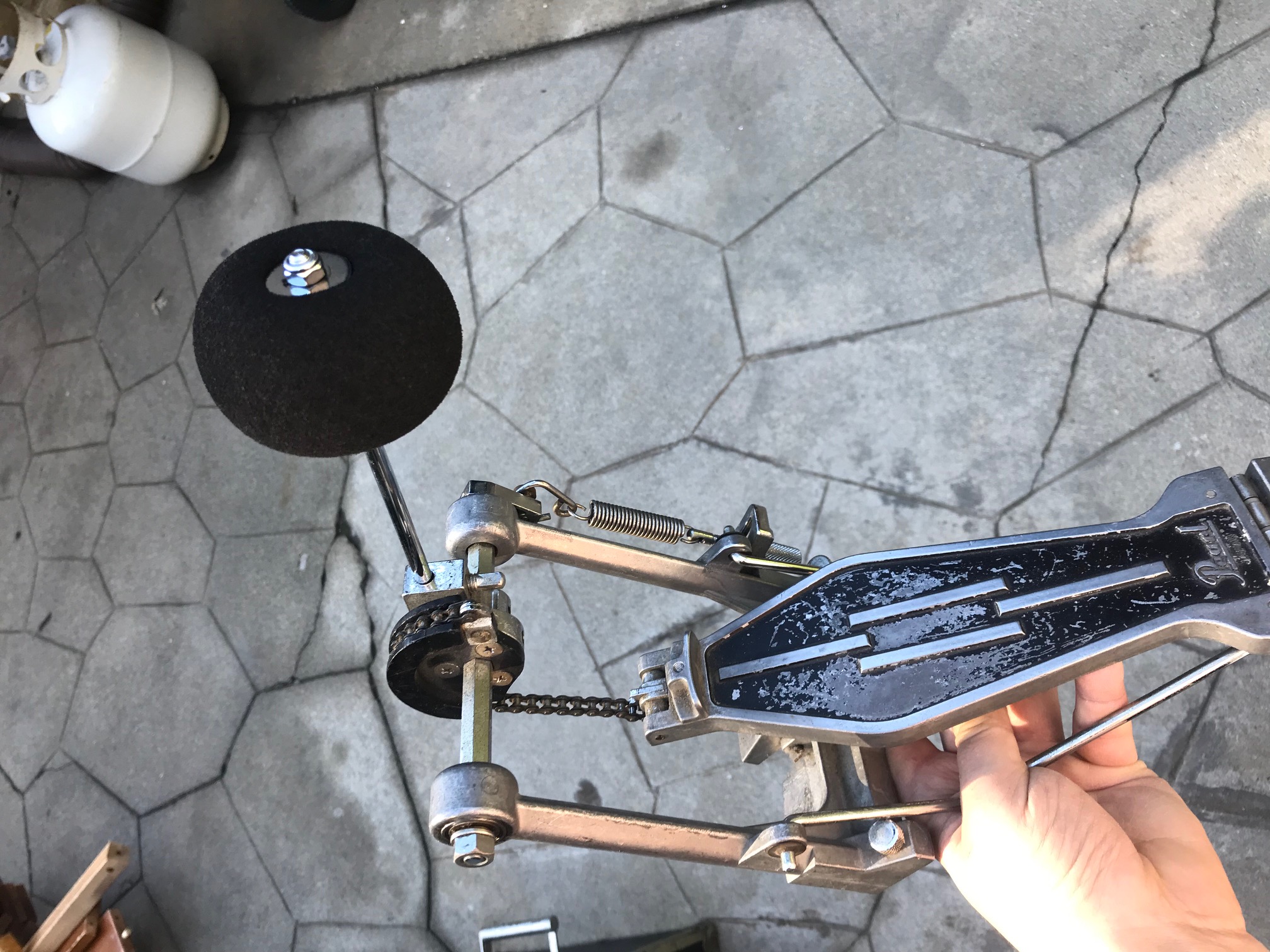 It sounded great with the cajon beater, especially with the box situated on its end. Unsurprisingly even louder than the cajon, with a strong presence. My newest vision begin to get clearer.

For this thing to function as a kick drum, I knew I’d need something in the way of bass drum spurs to keep it from sliding away from me while I played. I also needed a way to clamp the pedal to the foot of the box. I started sorting through piles of drum hardware I’ve had forever. Cymbal stands, clamps, tom arms, loose parts, etc. I found a bizarre L-shaped metal thing that would work for the pedal, and pillaged a semi-defunct Pearl hihat stand for its spurs. Dug through my trusty plastic bin of nuts and bolts, and landed here: 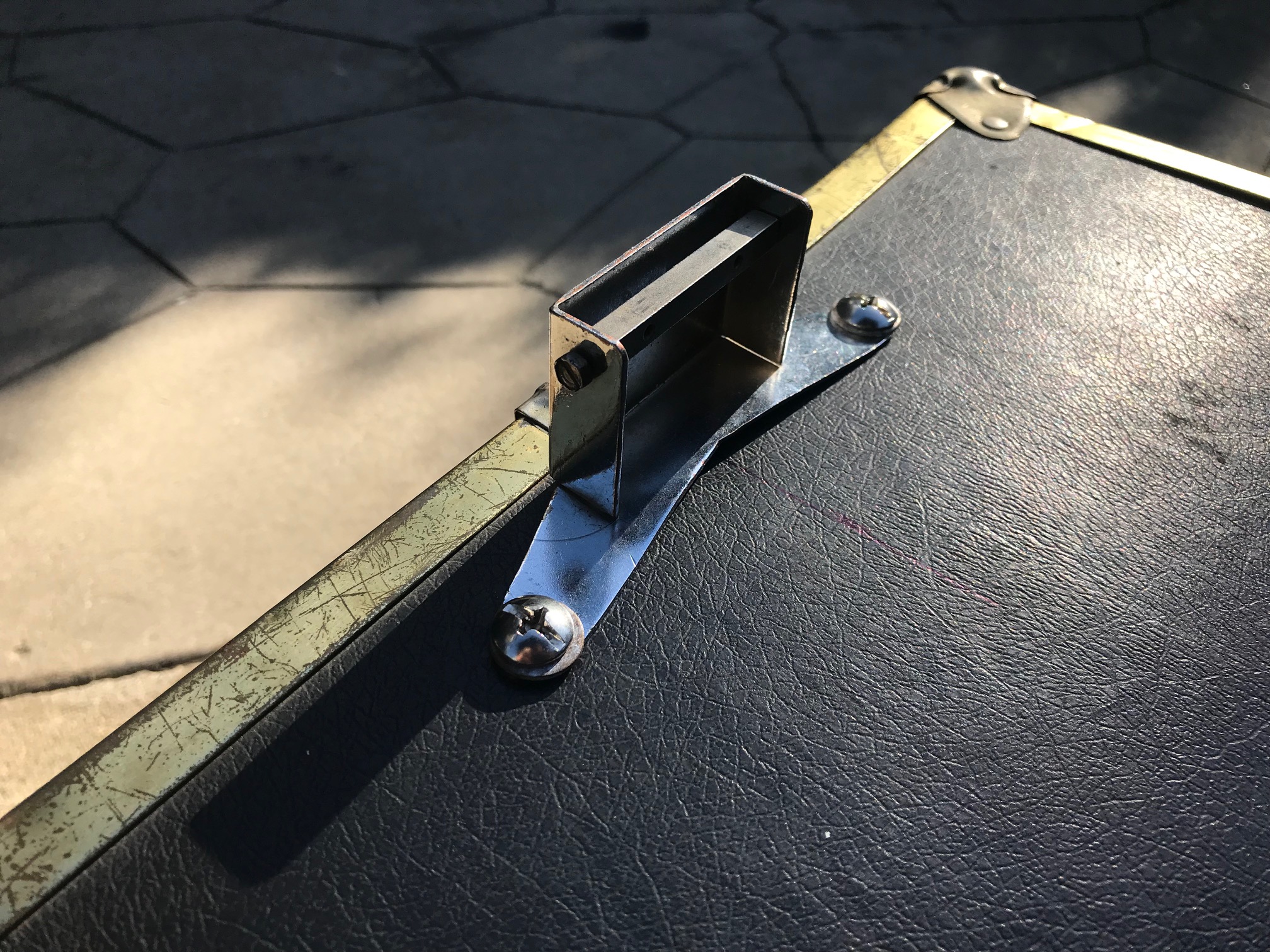 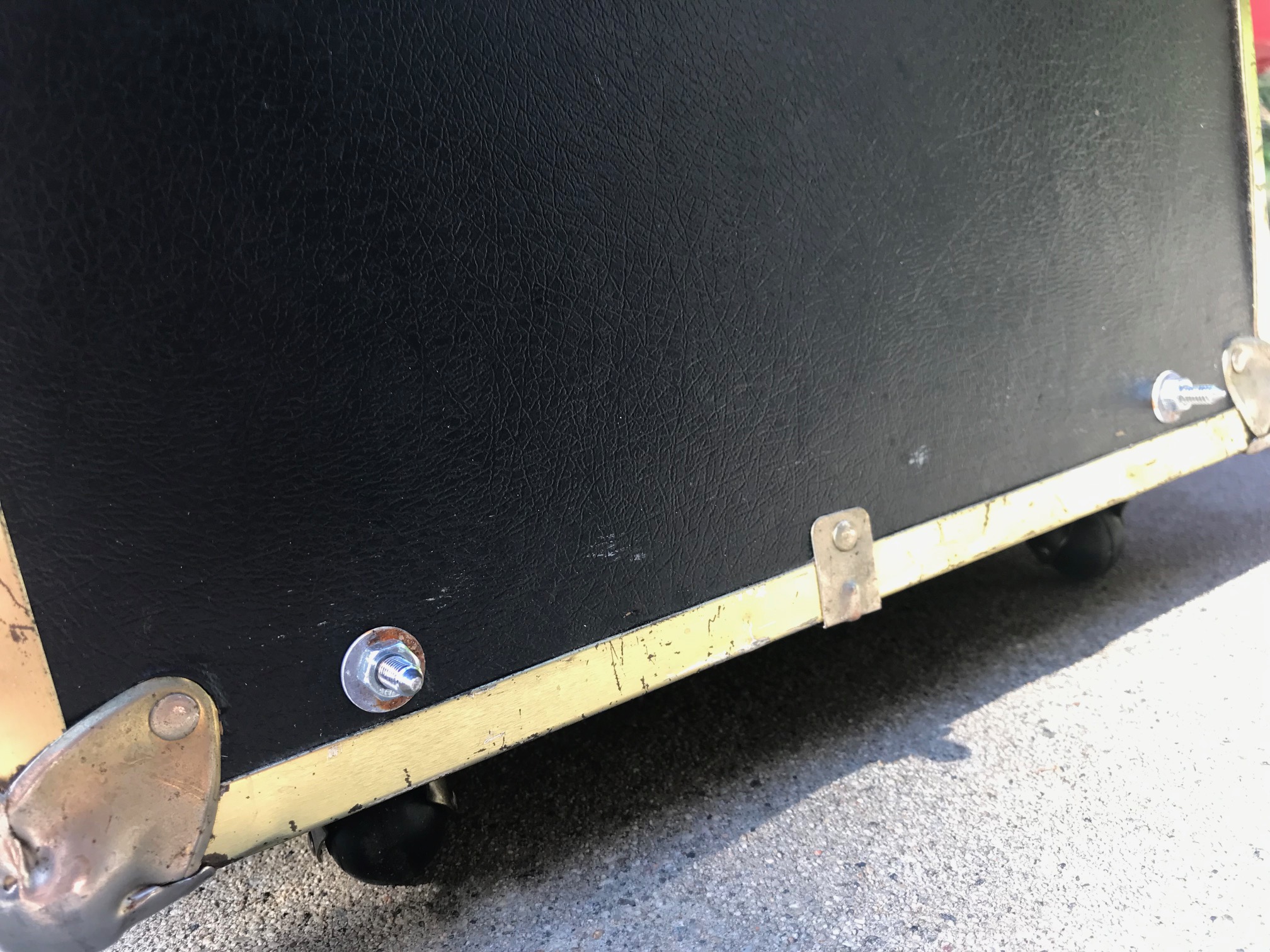 Nice. Now I could effectively hook the pedal up and play the box as a bass drum. The next step was to address the snare, and, if space allowed, figure something out in the way of a tom or two. I have a 1958 black diamond pearl Slingerland kit with two snares — a 13″ and a 14″ — and the 14″ has basically been sitting things out. I decided to transfer the 13″ Slingerland to the new kit, giving the 14″ the new role of main snare on the Slingy. For a tom, I’d grabbed an old white marine pearl snare from the Rose Bowl flea market earlier this year, which I’ve had sitting in the garage until its destiny made itself known. I removed the rusty snare wires, butt plate, and internal muffler, threw on some new heads, and tuned it real low. This would be my floor tom. 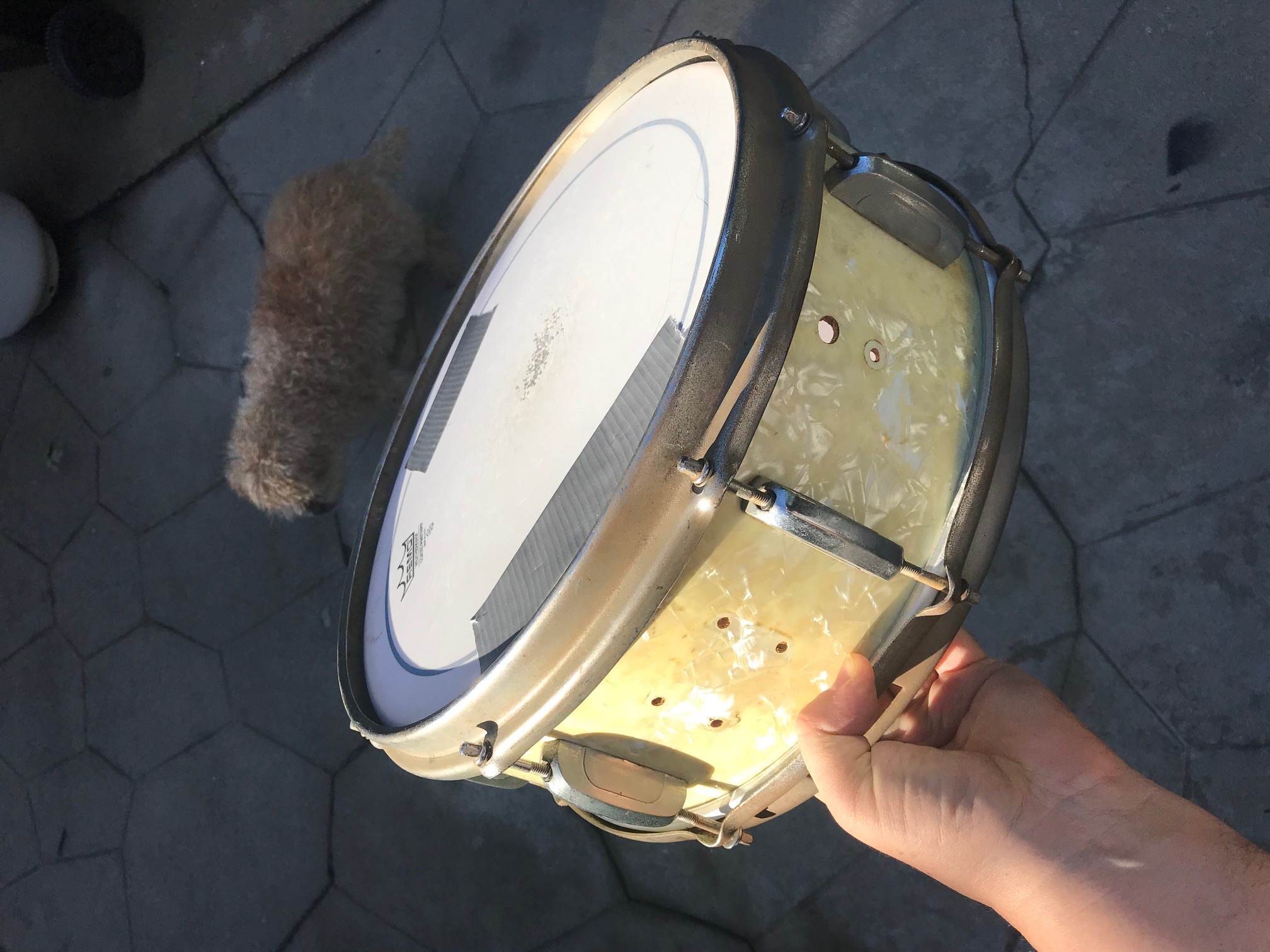 I then dusted off some retired WFL hardware. The snare basket would hold the new floor tom. The throne, while not the most cumfy thing around, would at least fit in the case since it’s so light and thin.

Now we were close. The next thing to address was cymbals, and how to mount them. Pondered it a while, and realized that, ideally, I’d love to have the finished box on casters so that I could pull it with a handle. If that handle could double as some sort of mounting platform for other hardware, I’d be golden. Then I found this: 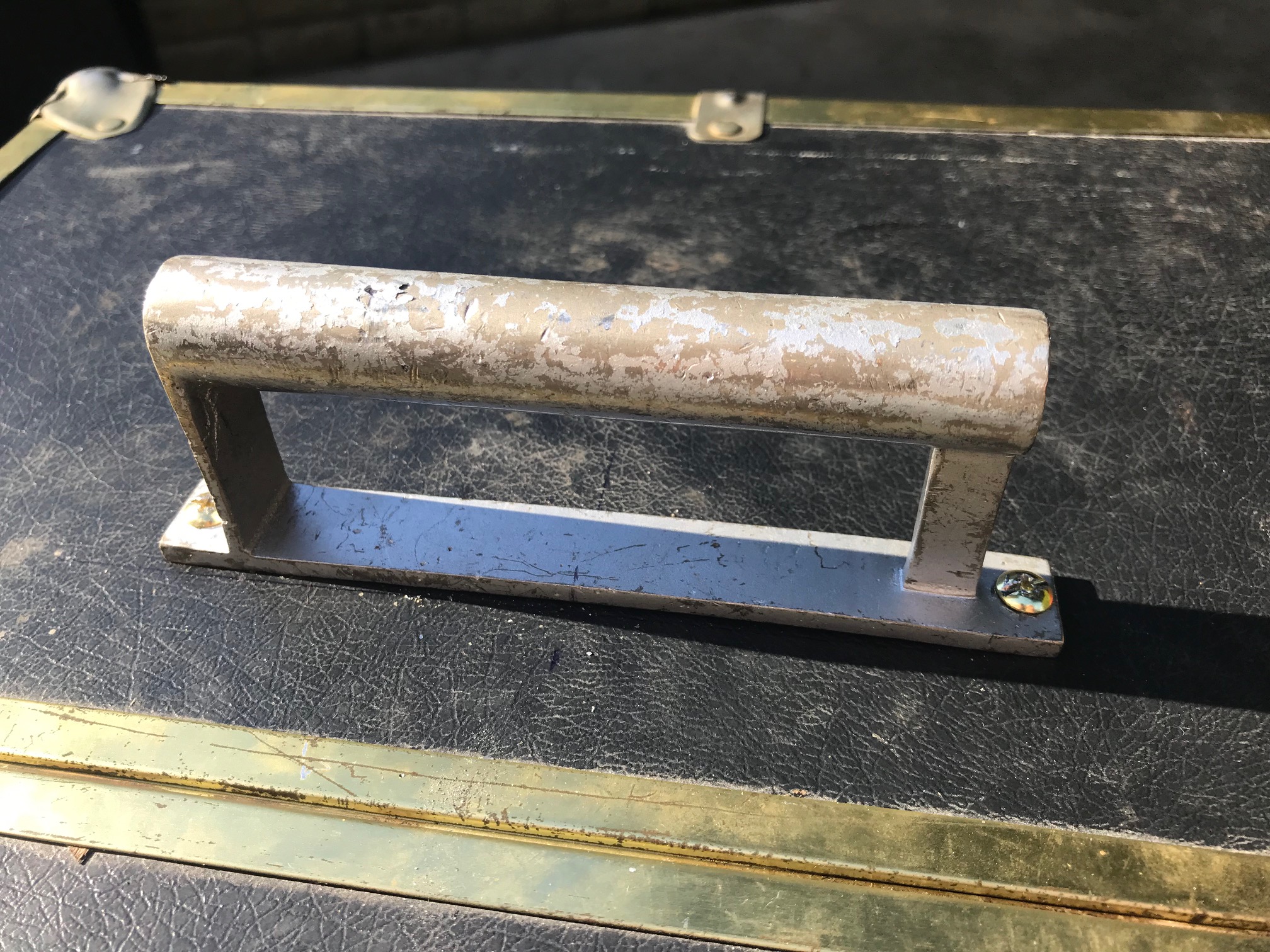 Perfect. The diameter of that handle is a standard-ish 7/8″ pipe, which would accommodate most clamps I already have. But before that, let’s reinforce the thing to the box:

That’d be a must, since this thing was bound to be heavy once loaded up. Now for the casters, which I mounted to the opposite end of the box as the handle: 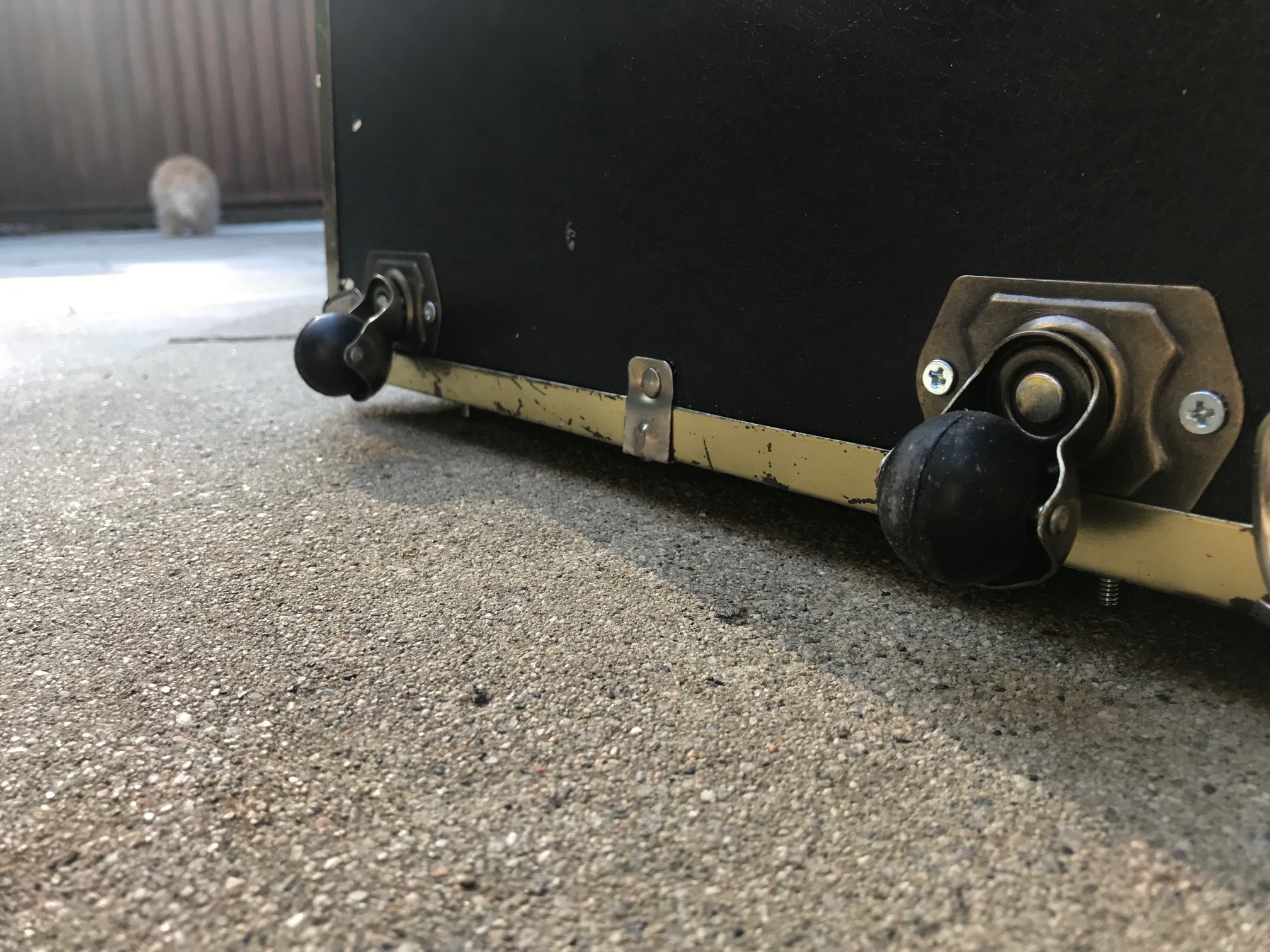 There’s really no substitute for a hihat stand. It’s one of the few parts of a drum set that touches your body. Gotta have that. And a ride. With hat, kick, snare, and ride, you could pretty much pull anything off. However, this box wasn’t gonna fit any cymbal larger than 15″. So for the ride, I pulled out an old Constantinople 14″ bottom hihat. It’s relatively light at 1150 grams, making it a surprisingly nice dwarf ride. Not too pingy, and even crashable. For a main crash on left, I couldn’t resist grabbing the old 14″ Zildjian crash from the Slingerland kit. It’s very thin and dark, and almost like a big splash.

For the hats, I took an old Zildjian K Custom Fast Crash which had been cut down to 11″, which is heavy and almost gongy for its size. Got it for nothing a long time ago, and have never had a use for it. Using that as the bottom hat, I paired it with a 1940s Zilco splash on top that I grabbed on Reverb.

Mounting the cymbals ended up being easier than expected, thanks to the handle and my decades-old hardware inventory. The winning pieces ended up being a gold Pearl tom mounting platform thing, along with the top of a Tama straight stand mounted horizontally, and an extension boom. While I was at it, I found a RhythmTech soundblock, and decided to mount that on the top of a Pearl straight stand, which the gold platform had room for. Tossed in another extra Tama stand for the main snare, and we were done. 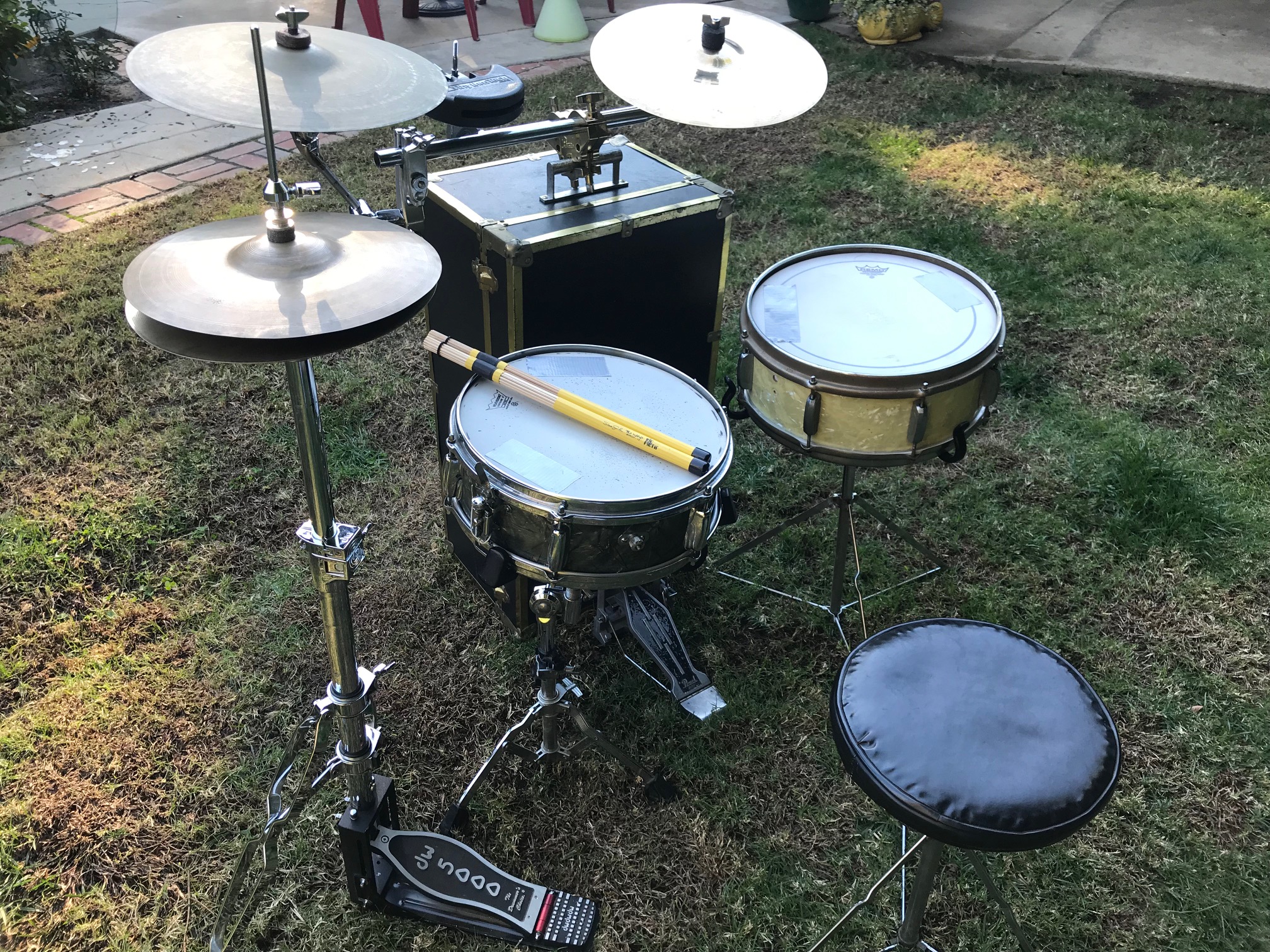 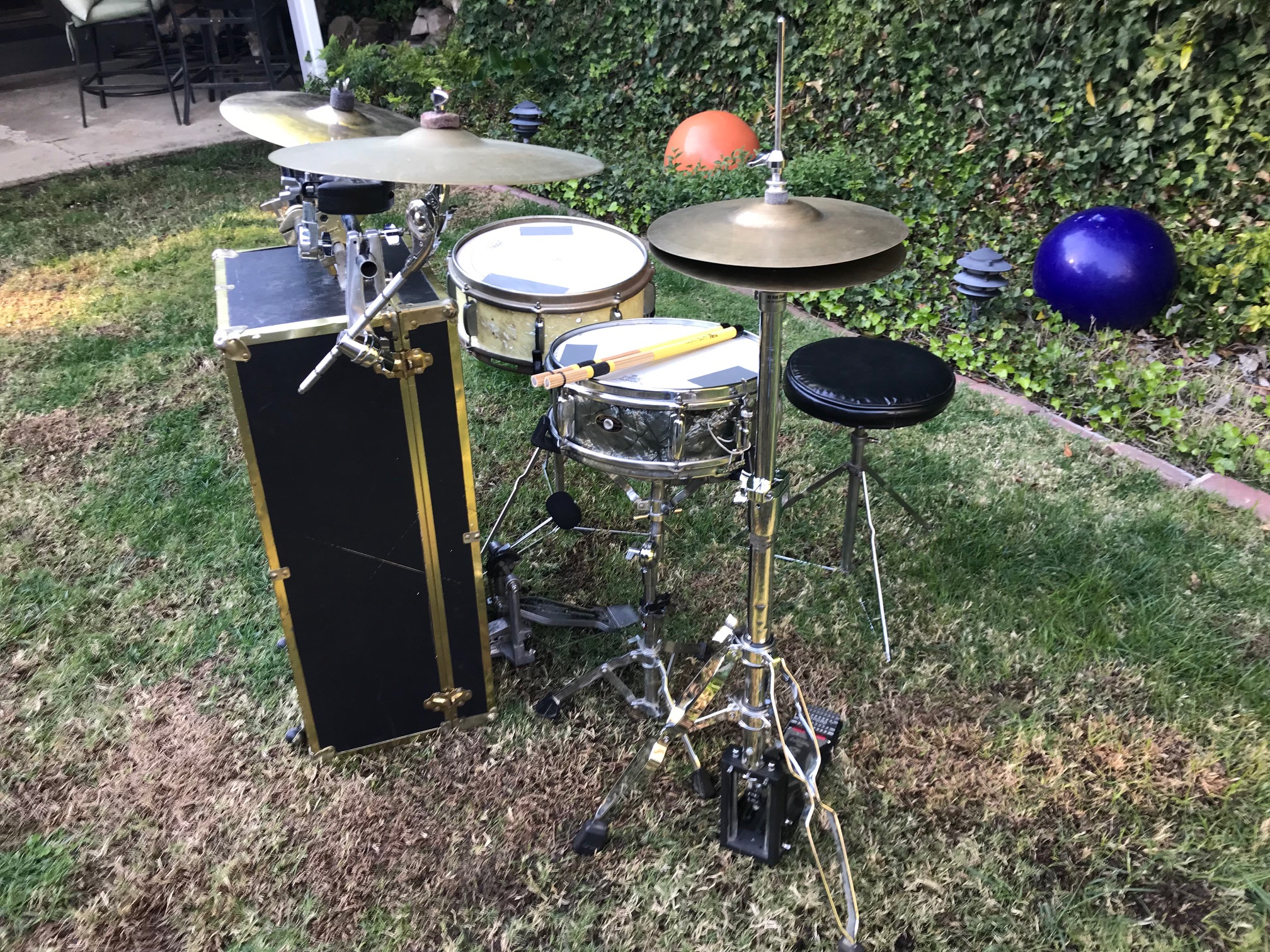 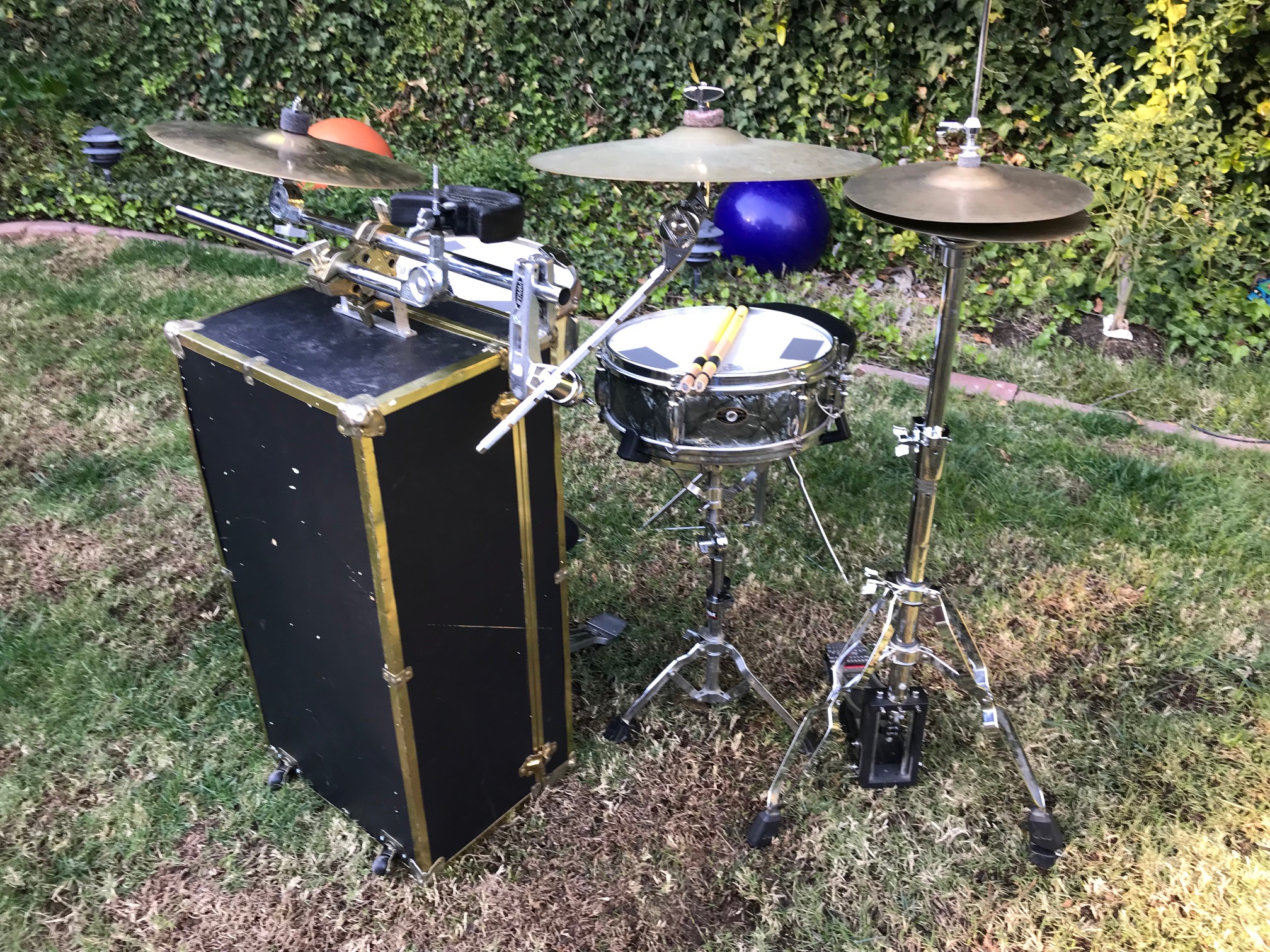 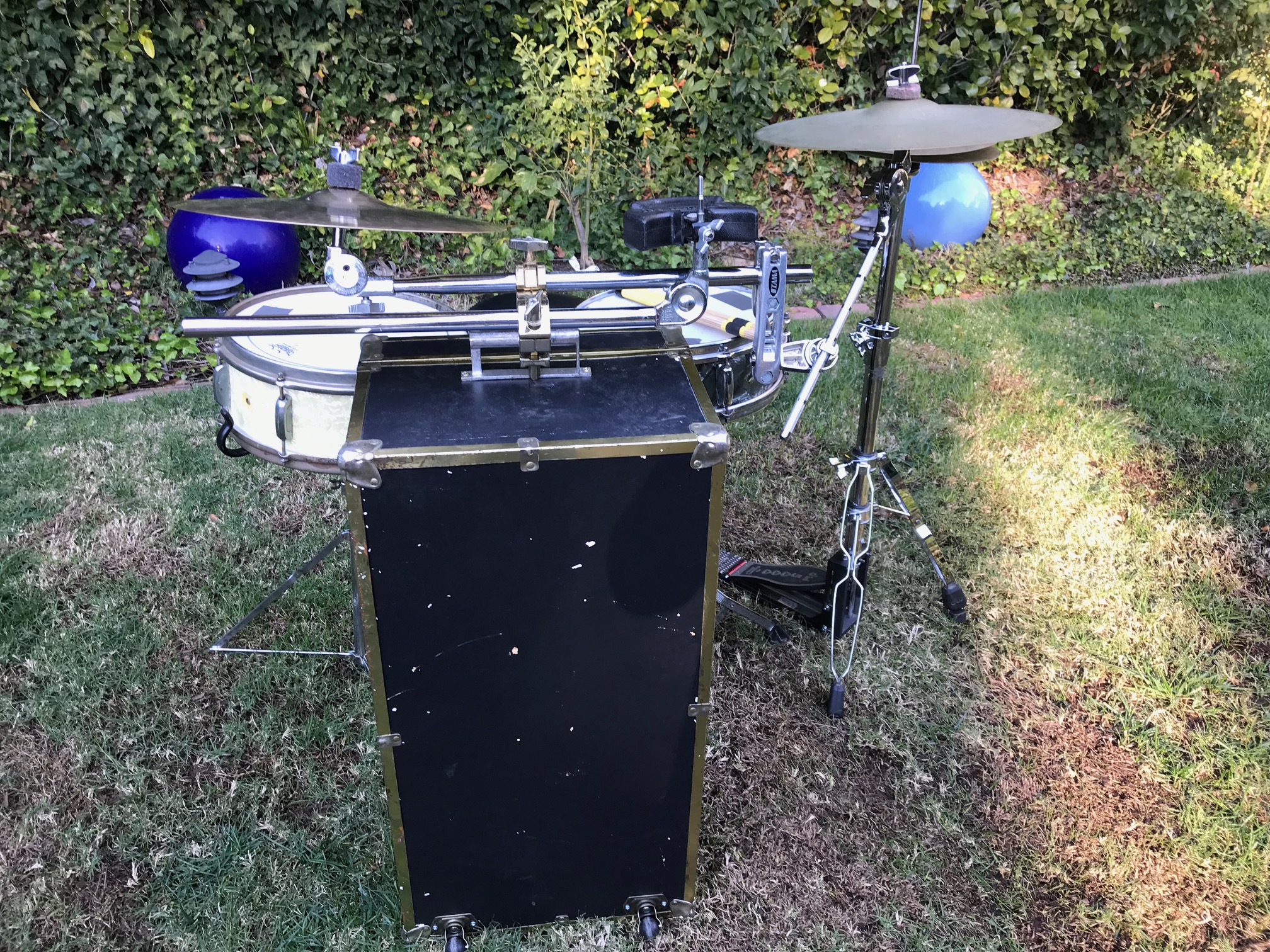 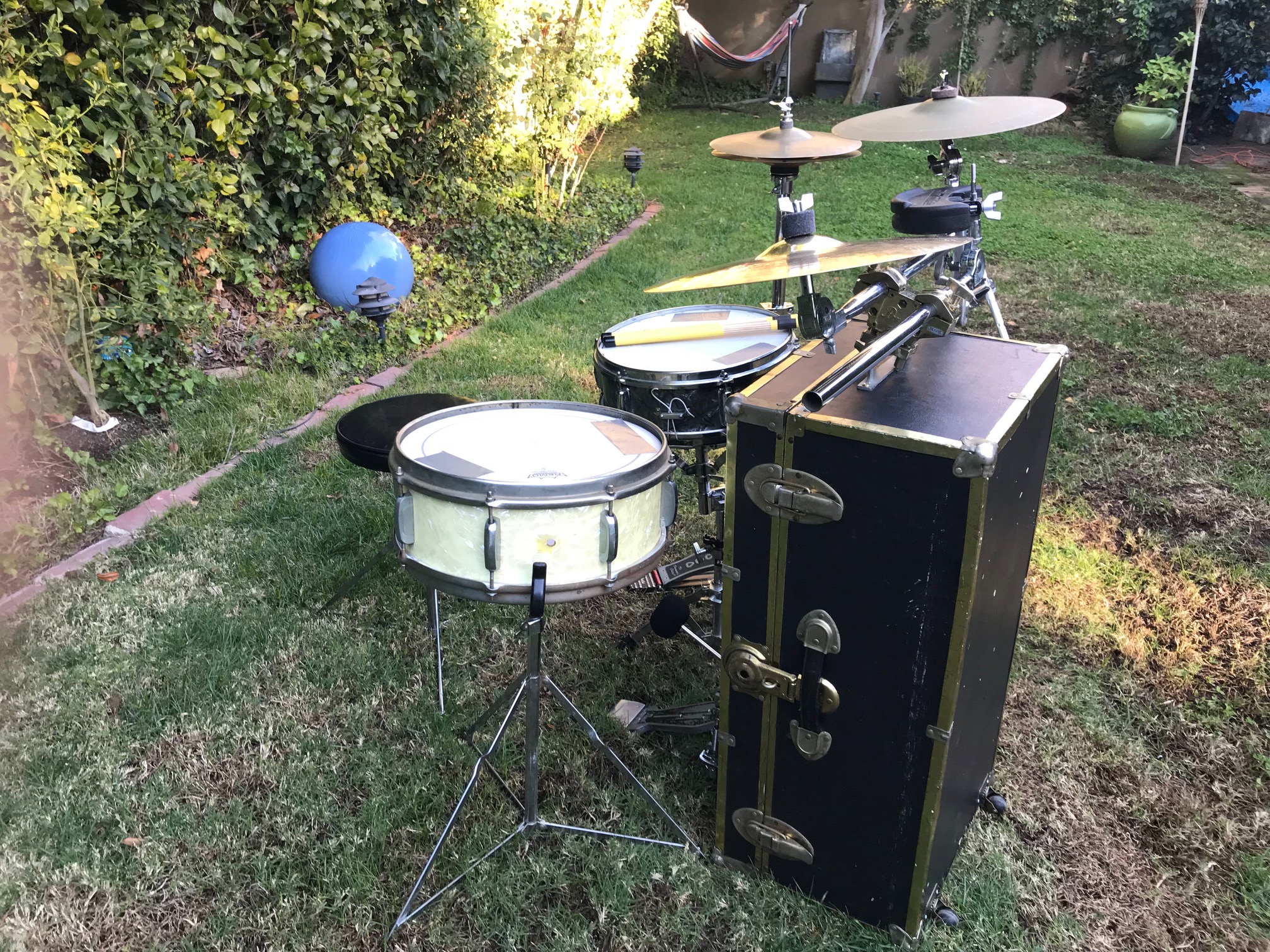 And here’s how easily it all fits into the footlocker: 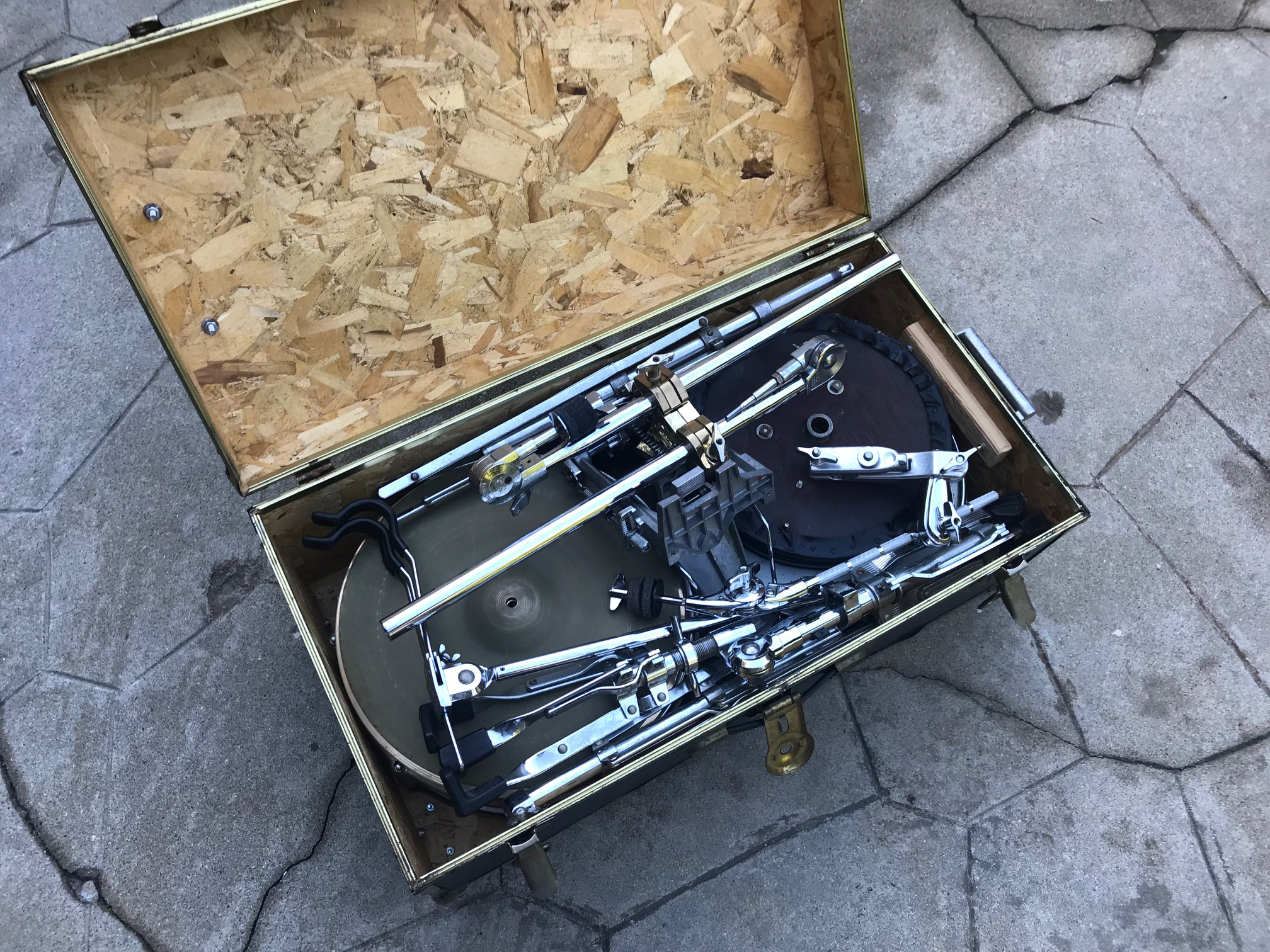 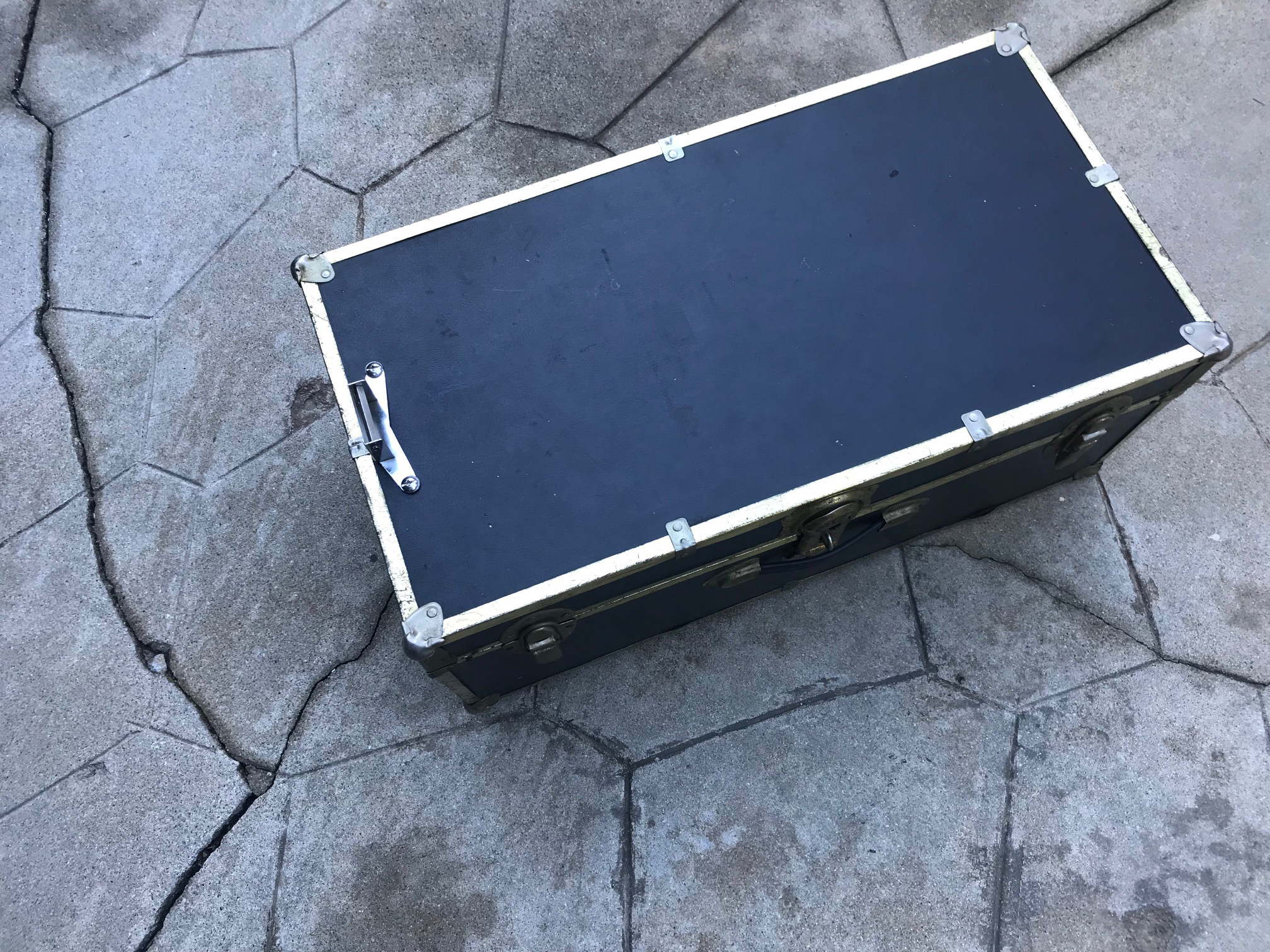 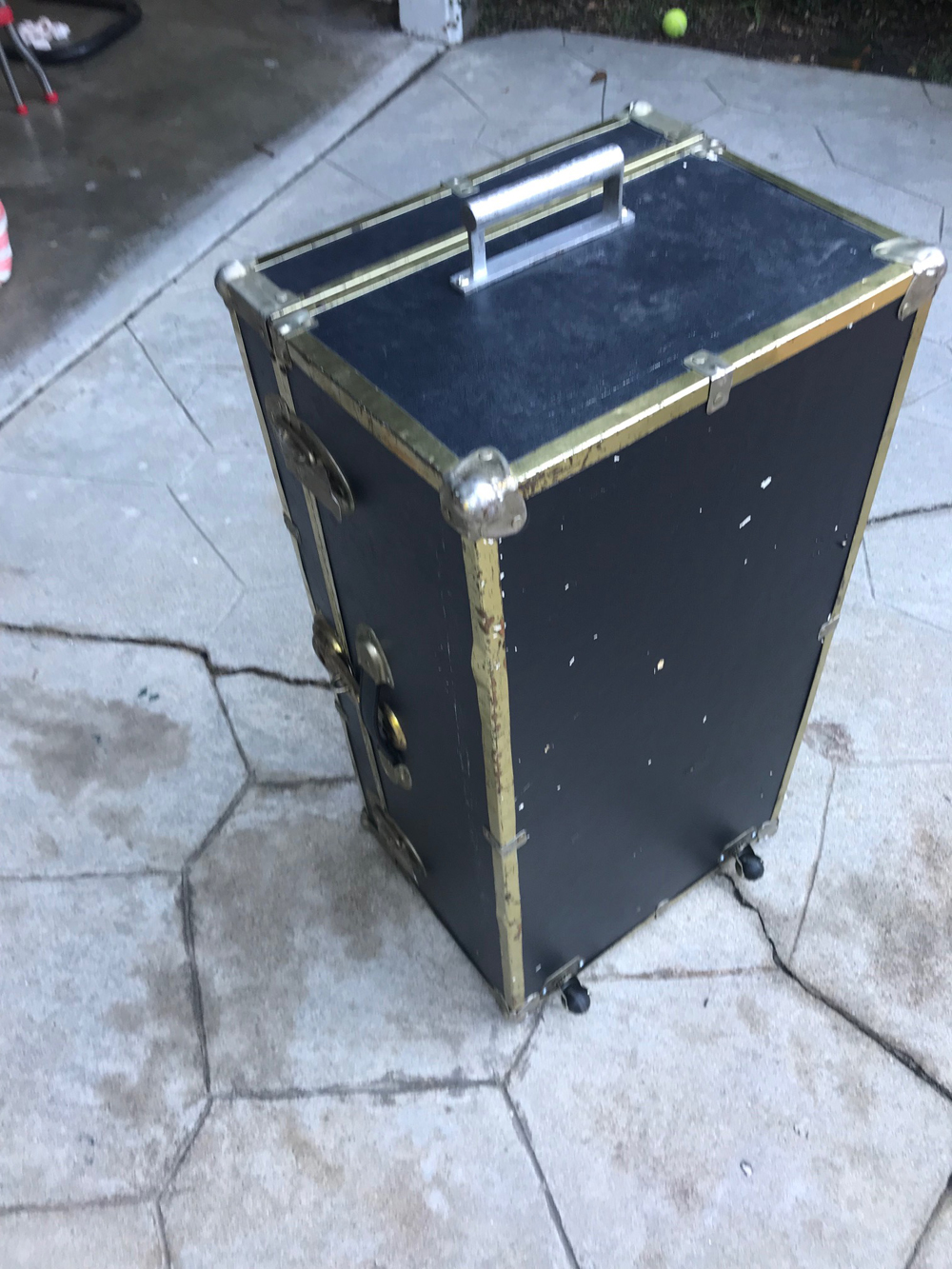 Here’s how it sounds in a tiny room on an iPad played with rutes:

Previous post: Why I’m off the Dodger wagon for the rest of 2018