Welp. Here we are. My favorite time of year. It’s October 11, 2018, and the NLCS is kicking off tomorrow with the Los Angeles Dodgers at Milwaukee Brewers. The ALCS will be putting on its own show with the Boston Red Sox and 2017 Champion Houston Astros.

The purpose of this blog entry is to shake off a few lingering thoughts on 2018’s iteration of my home team for historical record.

Dodgers are my MLB team. I revere the history. I was in T-ball during the Lopes/Russell/Baker/Garvey/Cey/Smith days, and am lucky enough to have those quintessentially American childhood memories of going to big league games with my dad, my friends, and my teammates. While I’ll always be a baseball fan first, I am indeed a Dodger fan in the truest sense of the term. Watching my team brings me joy, and following the individual guys throughout the season is a great way to spend a summer.

I was even ON the Dodgers one year when I was twelve.

This will be a surprise to “True Blue” fans, who can’t fathom such a thing. I in turn actually find their surprise what’s surprising. Part of my surprise is realizing how alone I apparently am on this one. I guess I regard the world differently than others. Even those close to me.

To preface all this, it should be noted that it’s not like I haven’t jumped off the Dodger train in the past. Folks in LA are quite aware of the telecast blackouts in town thanks to what was once Time Warner, and now Spectrum. For those who don’t know, the only way to watch Dodger games on television in the LA area — even if you were willing to pay for it — is to throw your DirecTV dish in the blue bin and spring for Spectrum cable. Nah, I said back in 2013 or so. I’ve actually spent the last several years uncharacteristically apathetic to the Dodgers for this reason. But I’ll always tune in for October baseball, regardless of which teams find themselves there.

2018 has been a different year, a big year, for me and my wife M. We’ve moved to a new home, and in getting all the basics sorted out, we broke down and got Spectrum, the cable company that holds the Dodger telecast in a stranglehold. While we really did it for the internet speed, it has consequently allowed us to follow the boys of summer for the first time in a long while. One of my favorite pastimes. We grew attached to lots of the players, catching a great game in Washington back in May. It’s been a blast watching Muncy come out of nowhere, and both Joc and Keek have had fantastic years. There’s lots to like.

Then there’s the Yasiel Puig factor, who has become a household name for even the most casual of baseball fans. And for the record, I understand that opinions on things vary. An animated antic to some is shameless narcissism to others. An emotional outburst to some is disrespect to others. Tossing a ball backward like a circus clown to some is impressive, to others not so much. Bat licking to some is, well. 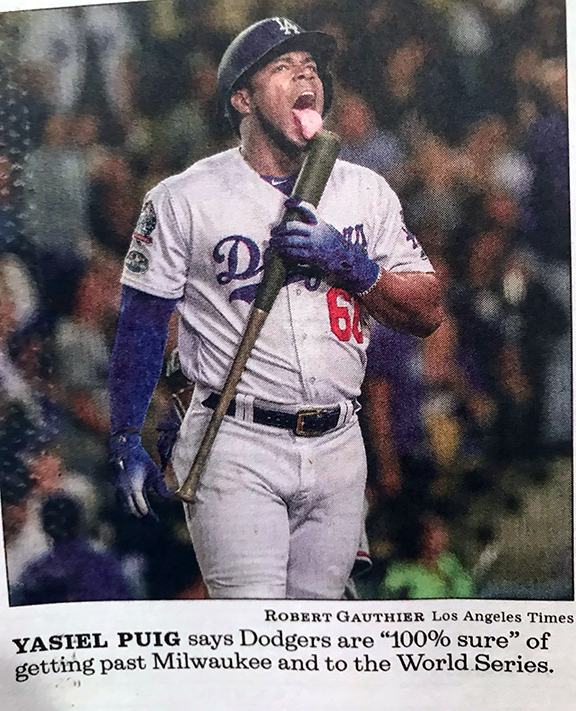 Former Dodger Manager and American treasure Tommy Lasorda has often described a true Dodger as: “Somebody who plays for the name on the front of his jersey. Not the back.”

Yasiel Puig is the exact opposite of this description. On cartoon levels.

At this point, now that we’re deep into the second week of October, my real problem isn’t even about Puig the player anymore. Nor is it about his performance. That’s all old news. It’s much bigger than all that. It’s the perpetual tolerance of him. The nonsense was perhaps amusing at first, especially with Vin Scully tossing in his own observations. But we’re now, what, five years into it? To tolerate it, condone it, make excuses for it, and arguably encourage it has taken all the joy of rooting for my team to win. To make matters sadder, you might even say there’s a new joy to be found in watching them lose.

A player disrespecting a game that’s larger than him is one thing. But when you have an organization like the Dodgers — who I thought was one of the classiest teams in history — continue to include this cancer in the lineup is just an extension of this disrespect. It’s a chump move. It’s an insult to my soul.

I understand how some die-hard-go-blue Dodger fans can’t understand this. But baseball is a microcosm of life itself. It’s what I love about it. The ups, the downs, the streaks, the mistakes, the dog days of enduring, the wins. And, as is in the case of life itself, I’ve found myself in a place where a group of people I’ve loved all my life — the Dodgers — insult me. Really bums me out. If I were a blind religious subscriber to the Dodger religion, I’d probably find a way to rationalize things and make it all fit into something I find palatable, as religious types do. But I can’t. It’s not my style. I must step away. I’m repulsed.

The fan adulation of Puig is its own problem, inspiring in me the kind of urge you get when you realize you can’t stand the people at a party and you want to leave the room. But perhaps more problematic is Dodger manager Dave Roberts, who has positioned himself to receive any blame to be had. While he certainly has his overlords dictating his decisions, he’s still the Dodger manager. And his insistence on starting Yasiel Puig has become akin to a pathetic sales pitch, aiming to create perceived value in an asset the organization has invested in. I can understand that on a business level, but it just won’t go away. And every time the Puig thing becomes an embarrassing scene, like, say, a pointless fight he instigates or a boneheaded self-absorbed base-running stunt he pulls in a GODDAMN PLAYOFF GAME, Roberts seems surprised that he has to pull the tool aside and scold him like he’s nine. Whose fault is that, exactly?

By the way, it’s not like there aren’t other guys to play right field, and bring more value to the lineup. Hell, Puig could be the greatest guy in the world and I’d still start Keek or Kemp over him.

Roberts has also made a number of stupid moves over the season, perhaps half a dozen I could count off from memory. He’s one of these modern managers who use analytics as a crutch as if this is fantasy baseball. I’ve often gotten the feeling he makes managerial moves just for the sake of looking busy. He’s platoon-happy, he manages with an “everybody gets an at-bat” T-ball mentality, he pulls guys out in the fourth inning when they’re 2 for 2, and he won’t even let a starting pitcher pitch the seventh inning with a 4-0 lead and an RBI. The guy has no concept of groove, and wouldn’t recognize his best starting nine if they went out and won 15-0. But this is all for another baseball discussion.

M and I recently watched a cool “Dodgermentary” recently that chronicled the 1988 Dodger championship season. While the world will forever remember Kirk Gibson’s centerpiece ninth-inning homerun in Game 1 of that World Series, there were lots of overlooked moments in that season that made it so special. Bulldog, anyone? Mickey? How about Scioscia’s homerun against the Mets in the NLCS? The documentary’s in three parts, and is a nostalgic celebration of Dodger fandom. A timeless nugget of baseball history. Highly recommended.

I shudder to think that people would want this 2018 Dodger team added to those history books. Really? Is it just about winning a World Series to them? I’ve waited 30 years for the next one, and I can wait 30 more.

Which brings me to the real point of this blog entry:

The 2018 Dodgers are dead to me. It’s team Brewers from here to the end. Understand that this is not purely out of spite; I’ve been expecting to see the Brewers here in October ever since following them on Facebook back in June when my brother inlaw moved his family to Milwaukee. I’m also rooting for manager Craig Counsell, who was a Dodger himself. My generation. He’s one of us. He’s also no stranger to October, holding the unique record of scoring the winning run in Game 7 in two different and spectacular World Series, in 1997 and 2001. He belongs in this contest, and I’d love to see him win as manager.

I also have a lasting stamp of Brewer fever ever since I was a little kid. My dad’s old teammate Jim Colborn — who coincidentally served as Dodgers pitching coach last decade — pitched for the Brewers back in the ’70s; we went and saw him play the Angels in Anaheim once. They were in the American League at the time. During dinner after the game, Uncle Jim gave me ball signed by the team. I also had a Brewers windbreaker and a Brewers pennant on my wall.

So GO BREWCREW. Don’t forget that they were first seed in all this, by the way. They’re a worthy team.

It’s impossible not to notice some irony here. I’m jumping off the Dodger ship PRECISELY BECAUSE I’m a Dodger fan. Perhaps more so than most, if you want to get classical about it. As I learned by playing baseball as a young boy, it’s not just about winning. That’s the lasting takeaway lesson from playing sports as a kid.

IT’S NOT JUST ABOUT WINNING.

That applies to life as well. There are some things in life that are bigger than winning. Remember that.

So here we are, with the Brewers looking down the barrel of the NLCS, and the cancerous Dodgers their next foe. Of all the teams, right? It seems the stakes for the 2018 NLCS have been raised to unexpected and surprising levels for me personally. Perhaps, after such a sour Dodger season, I’ll be able to experience that joy of watching my favored team win. With a new and profound relevance.

But what if the 2018 Dodgers win? some might ask. What will I do? Well, it’d be a tragedy for the legacy, perhaps irreversible, but sadly I probably can’t think of a more fitting champion to represent everything I hate about what Major League Baseball has become in recent years.

But we’re not there yet. There’s still hope. Go Brewcrew. They’re the team that could literally save the Dodger legacy from irreparable harm. And I suspect other Dodger fans will join me when the Brewers take on the Astros a couple weeks from now in the World Series. How hilarious it would be if they could do what the Dodgers couldn’t. Beat those Astros. Talk about icing on the cake.

FOR 2019: Bring Mike Scioscia up to LA to manage our Dodgers. With Mickey Hatcher. They’ll get it done right, and you’ll notice how much more fun winning will be. Trade Puig for whatever a fool will give for him. Go get some pitching. Play Keek every day. And for the love of God, let your healthy starters throw 120 pitches if they have a lead. They’re big boys now.