The other day I was friended on Facebook by somebody who shares my surname, John Paul Albao Jr. He hit me up on chat this morning and gave me some interesting information about my roots.

What I’ve known all my life is that my paternal great grandfather, Cipriano Albao, sailed to Kauai from the Philippines in the early 1900s. He was young, maybe about twenty, and was chasing his girlfriend — my great grandmother — the daughter of a minister. Incidentally, her last name was Alba. Just a coincidence.

Cipriano and my great grandmother had five sons and four daughters. A gaming family, all the boys were ballplayers. Cipriano was a godfather of sorts, running the island’s gambling rings. I’m told that back in the day, my grandfather and his brothers were the only folks on the island who had cars.

We don’t know much about Cipriano’s life before his final stint on Kauai, so as far as we’re concerned, the Albao history began there. He never talked much about his past, for whatever reason.

So here we are today. John Paul Jr. and his dad — Jr.’s living in the Philippines, Sr. (who goes by Juan) is living in Canada — started leveraging the power of the Internet to see if they could find out what happened to Cipriano. Jr.’s great-great grandfather, Mariano, was Cipriano’s brother. That’d make John Paul Sr. my third cousin, with Jr. being my third cousin once removed. Hypothetically, my kid would be Jr.’s fourth cousin. It so follows that Mariano’s my great-great uncle.

Here’s what I found out today:

Cipriano and Mariano were the sons of Captain Eugenio Albao, the first man on record with the surname. Rumor in the Phils is that Eugenio was a pirate in the 1800s, and at the end of his life he donated two schools — an elementary school and a high school — to one of the communities there in the islands. For those of you in Los Angeles, I suppose that’d be a similar figure to our own (but considerably more ancient) Juan Rodriguez Cabrillo.

So, you know, that’s kinduva trippy way to start a Tuesday. It’s not every day that you find out you’re the great-great grandson of a 19th-century pirate. But somehow I’ve always known that.

That’s about it for now. To be continued.

I just received some more information from my aunties/cousins.

From my second cousin once removed, Winni. Cipriano was her mother’s dad.

The lineup for uncles/aunties is as follows:

Hello family.. and the beat goes on. How exciting to read about Grandpa Cipriano Amante Albao and to learn that Jace found more relatives.

Grandpa Cipriano saw Grandma Manuela when she stepped off the train on Kauai (so the story goes). He told his friends that he was going to marry that girl. They corresponded by leaving love letters under a rock by the river.

According to Aunty Angie Gueco, Grandma Maria Goles Alba had a cousin by the name of Dana. Aunty Angie and Uncle Charlie, with the assistance of Senator Sparky Masunaga, arranged for Dana’s family to come to Hawaii. If anybody knows of the last name of PANAGSAGAN, check them out, as they are our relatives. Aunty Angie said there may be at least 50 relatives or more (Alba side). Better find them ASAP
so they can join us for the California Albao Family Reunion!

And again, from Donna:

Hi again! Just happen to have a pic that includes your great grandma and great grandpa (well, it looks like him anyway). I’m copying Cuz Katinka, maybe she can verify it.

My grandma must have been about 12-13 years old, so your great grandma was about 17-18. I’ll have to check my notes at home. I put together a booklet of ‘memories’ that my grandmother wrote about their life in the Philippines and Hawaii. I also transcribed a recording of Uncle Manuel’s account of the family’s encounter with a ‘duende’*, which is a dwarf that supposedly resides in a mound of earth. It is said that one who disturbs the mound where it resides falls ill. They are known as tricksters, but they can be very helpful as well. 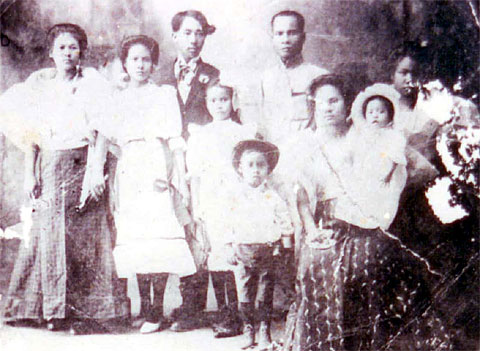 *Donna is speaking of Uncle Manuel’s recorded accounts of Kilho, which you can read about here. It includes Manuel’s scanned journal, as well as a special audio clip!

Thank you all, ladies!

hey jace…cool stuff! you know, my grandma and grandpa had 5 sons and 4 daughters: mary, carol, eleanor (“jo”) and tinka.
according to my aunty angie, cipriano (my grandpa) was very secretive about his family. she knew he had a sister named eugenia and that was about it.
the reunion is gonna be a blast and we’ll get to uncover lots of things about the albaos! i do have a “tree” of our history — including my great grandma (nanay) !
can’t wait to see you. xoxo love, win

Hi Jace: For some reason, my computer was acting up so I had to start a new email.

I contacted John Paul Albao Jr. and he sent me the following information: “The Albao’s in Masbate are related to each other. Be it in Mobo, Diimasalang, Baleno, Miilagros. But all of the Albao’s originated in Baleno. As of now, specifically I cannot confirm the relationship in the family tree because I’m very young. I’m only 21 but father told me that all those Albao’s that
belong to said towns are closely related.”

Grandpa Cipriano never spoke of his family so it is very exciting to learn of an Albao that you met on internet.

Thanks for your research. I look forward to seeing you and the rest of the Albao Family next week.

Next post: My maternal grandparents before they were no longer spring chickens