What is a duende?

Coming from southern Spain, “duende” has only recently migrated to English. Dictionaries give meanings sometimes at odds with each other.

du·en·de n. The ability to attract others through personal magnetism and charm.

The duende is a rarely explained concept in Spanish art, particularly flamenco, having to do with emotion, expression, and authenticity.

I find it interesting that all four sources suggest the idea of inspiring charm and emotional magnetism. While the New Oxford English and Random House dictionaries both suggest the idea of a supernatural being, only the New Oxford English uses the word “evil”. Notice how neither Dictionary.com nor Wikipedia mention anything of a supernatural being, but instead regard the term as a personality trait or a force of expression.

I think it’s important not to blur the distinction between “duende” and “Menehune”, as I’ve seen done sometimes. In Hawaiian mythology, the Menehune (plural) are similar to elves or fairies. They are trickster beings, though usually mischievous and not cruel. They are very small (between six inches and two feet tall), they are always naked but covered with long hair, and enjoy singing, sports (particularly archery), and dancing. In Hawaiian legends, the Menehune are stonemasons and other craftsmen, each specializing in a distinct handicraft. The legends claim that the Menehune built temples, fishponds, and even highways. They make canoes, build houses, and do many of the pleasant things fairies are always doing.

While the duende and Menehune loosely share certain traits in the area of mischief, small size, and even body hair (note the “catlike” description in the journal pages that follow), the Menehune are exclusively linked to other areas of Polynesian mythology. For example, the Menehune are afraid of owls. When they become too mischievous and cause too much chaos, the owl god, Paupueo, sends all the owls to chase them into the forest.

So what exactly is a duende?

In 1920, Uncle Manuel Alba — my fraternal great-grandmother’s younger brother — documented the Alba family’s experience with a certain duende who revealed itself as Kilho. Manuel wrote this journal after he reached adulthood.

The Alba family’s experience with Kilho occured in the Philippines when Manuel was 10 years old, about 100 years ago. Apparently Kilho had a fondness for Manuel, seemingly singling him out from the family, and displayed the type of behaviour you’d see from a child suffering a case of puppy love. Kilho would perform antics that begged for attention, including hiding objects, eating food, and leaving notes.

Fact? Fiction? A practical joke contest? Too many mushrooms in the adobo? You be the judge.

Uncle Manuel’s journal is 14 pages long. His baby sister Angie, who I met this year at the 2005 family reunion, has been the caretaker of these papers. She has since given them to my dad’s cousin Jamie, who has scanned them for our permanent records.

*Yep, Auntie Angie’s still hanging in there. While great-grandma Alba would be 110 years old today, her baby sister Angie is 25 years younger. Angie’s a young 85.

Each of the 14 links below will open up the associated page into a new browser window. When you’re finished reading a page, you can close its window and come back here to launch the next page.

Below the page links are some artists’ conceptual images of what a duende looks like, based on witnesses’ descriptions. 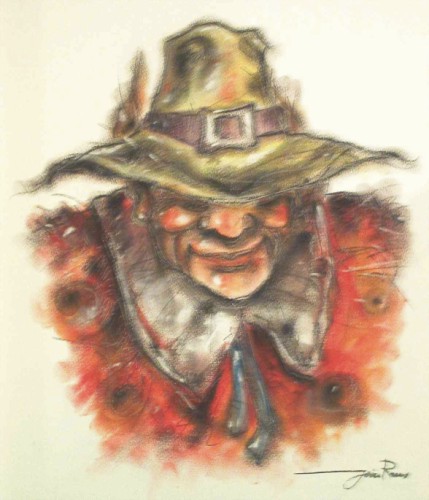 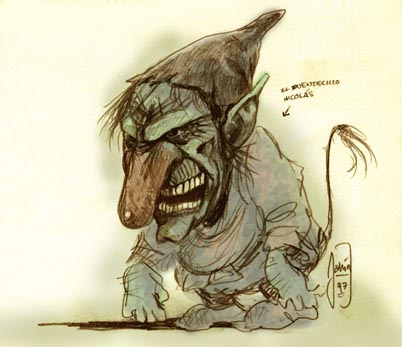 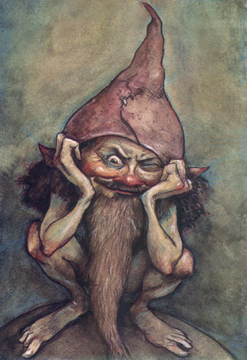 Now this one is really odd. When I got home from the reunion, I downloaded some of my photos from my digital camera. One of the photos I took with Jamie came out really wacky:

I also seem to be missing a slipper.