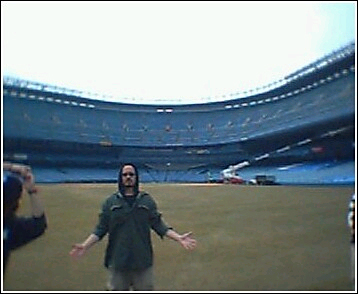 I was in NYC in March of 2004. A couple friends and I got up one morning and took the train up to the Bronx to take a 12pm tour of Yankee Stadium, the House that Ruth Built. A haunted house at that.

Sprinting from the subway, we made it just in time.

We visited the Press Box, the Clubhouse, the bullpen, the field, and the famous “Monument Park” over the left field wall which has bronze plaques of all the greats like Ruth, Gehrig, DiMaggio, Mantle, etc. A tour guide gave us some in-depth Yankee history and trivia, and invited us to ask questions.

If you’re curious — as I was — Yankee Stadium is oriented so that the pitcher, when facing the plate, is facing west. This was the case for the oldest of ballparks, as they’d play during the daytime without lights. Parks were set up this way so that the batter wouldn’t have the late afternoon sun in his eyes. It’s the outfielders — especially the centerfielder — that take the pain.

*This is also the origin of the term “southpaw”. A pitcher’s left arm is to the south of him as he’s facing the batter.

Change was in the New York air that year as spring was approaching. The Yanks had just signed Alex Rodriguez (scheduled to play third base), Gary Sheffield, Kevin Brown, and Kenny Lofton, mercilessly piling more talent on top of their already potent line-up which already included the recent addition of Jason Giambi. Their dynasty promised to continue in 2004 and beyond.

But alas, October’s drama showed the world that you can’t buy a World Series Championship. This was 2004, and it was in the stars for the Boston Red Sox to finally break the Curse of the Bambino. Boston accomplished something that has never been done before in the history of sports: down 3-0 in a best of seven series, they came back to win four straight to win the American League Pennant. Against the mightiest of Yankee teams, in Yankee Stadium. It was the best series we’d ever seen. The curse had been broken.

This was my first visit to Yankee Stadium. I stepped on the field. I took a few blades of outfield grass and put it in my wallet. I touched the Babe in Monument Park. I won’t go so far as to say it was our visit that broke the curse, but hey, it’s a fun concept to think about.

The Boston Red Sox, in case you’ve been hiding under a rock on a deserted island in the Pacific for the last couple years, went on to win the 2004 World Series, sweeping the Cardinals.

For comparison, we took the train out to Queens the next day to visit Shea Stadium, where the Mets play: 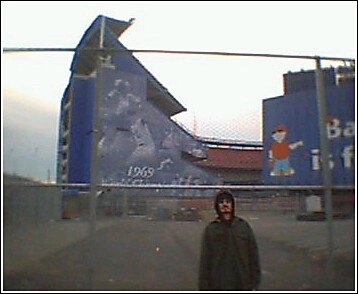 Put it this way: if Yankee Stadium was Disneyland, then Shea Stadium would be the public restroom at your nearest municipal city park. Poor guys. Gotta love ’em!