The History Of Fireworks 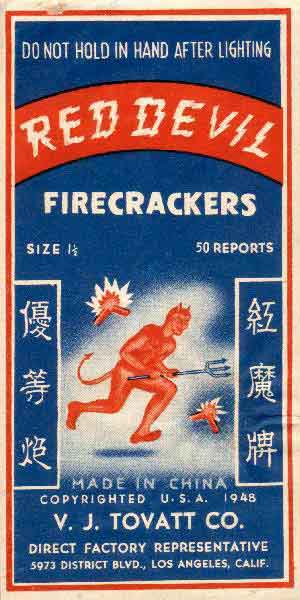 Fireworks originated in China some 2,000 years ago. The most prevalent legend has it that fireworks were discovered or invented by accident by a Chinese cook working in a field kitchen who happened to mix charcoal, sulphur and saltpeter (all commonly found in the kitchen in those days). The mixture burned and when compressed in an enclosure (a bamboo tube), the mixture exploded.

Some sources suggest that fireworks may have originated in India, but in the October 18, 2003, online edition of The Hindu, an Indian national newspaper, the Chinese are credited with the discovery of gunpowder.

A Chinese monk named Li Tian, who lived near the city of Liu Yang in Hunan Province, is credited with the invention of firecrackers about 1,000 years ago. The Chinese people celebrate the invention of the firecracker every April 18 by offering sacrifices to Li Tian. During the Song Dynasty, the local people established a temple to worship Li Tian.

The firecrackers, both then and now, are thought to have the power to fend off evil spirits and ghosts that are frightened by the loud bangs of the firecrackers. Firecrackers are used for such purposes today at most events such as births, deaths and birthdays. Chinese New Year is a particularly popular event that is celebrated with firecrackers to usher in the new year free of the evil spirits.

Once in Europe, the black powder was used for military purposes, first in rockets, then in canons and guns. Italians were the first Europeans who used the black powder to manufacture fireworks. Germany was the other European country to emerge as a fireworks leader along with Italy in the 18th century. It is interesting to note that many of the leading American display companies are operated by families of Italian descent such as the Grucci family, Rozzi family, and Zambelli family.

The English were also fascinated with fireworks. Fireworks became very popular in Great Britain during the reign of Queen Elizabeth I. William Shakespeare mentions fireworks in his works, and fireworks were so much enjoyed by the Queen herself that she created the position of “Fire Master of England.” King James II was so pleased with the fireworks display that celebrated his coronation that he knighted his Fire Master.

In the modern era, the American fireworks industry really began to influence Chinese manufacturers following President Nixon’s normalization of relations with the Chinese Communist government in the early 1970s. Prior to that time, business was being done between U.S. and Chinese companies through Hong Kong brokers with little or no direct contact with mainland manufacturers.

Throughout the 1970s and 1980s, the distribution channels in China were essentially state owned factories producing fireworks that were then exported through government owned provincial export corporations. Products produced in Hunan went through the Hunan Export Corporation, and products produced in Jiangxi went through the Jiangxi Export Corporation, and so on. During this period, factories were not required to make a profit, but rather their goal was to keep people working in a region of China where there was no real industry other than agriculture. The Chinese government subsidized these factories to keep production going.

The Provincial Export Corporation in turn sold to Hong Kong brokers who were the link between Mainland China and the foreign business entities. The Hong Kong brokers procured orders, arranged logistics, and helped finance shipments to the U.S. distributors.

It was also during this time period that the first formally educated leader of China, Chairman Deng Xiaoping, saw what his counterparts in the former Soviet Bloc did not see, and that is that Communism simply did not work economically. Chairman Deng began a policy of economic reform that basically set China on the road toward capitalism.

During the 1980s, China opened up dramatically to travel within its borders for visiting U.S. importers. This enabled the first American fireworks buyers to travel to the production regions and establish relations with Hong Kong exporters and the provincial export corporations.

In the late 1980s, consumer fireworks became the focus of intense scrutiny by the U.S. Consumer Product Safety Commission. Up to this point, most of the fireworks products had old generic export corporation labels that had incorrect warning labels based on item size and performance. To correct the situation, representatives from the CPSC, American Pyrotechnics Association, and Hong Brokers Association spent 10 days in Southern China meeting with representatives from each export corporation and factory managers, on a province by province basis.

The meetings involved shooting each item produced in China and determining what the appropriate and correct warning descriptions and print size should be from the point of view of providing safe warning labels for the American consumers. The Americans involved took on the infamous moniker of “The Shekou Six” by most of the shell shocked Chinese industry people, and from that meeting and a few that followed was born the American Fireworks Standards Laboratory (AFSL) which monitors firework production within China to this day.

In the 1990s, economic reform continued under Chairman Jiang Zemin as Chinese factories were weaned off government funding and forced to turn a profit for the first time. It was during this period that many Provincial Export Corporation personnel left the government owned companies and were permitted to start their own.

Initially these new private companies worked through the established Hong Kong brokers to reach the U.S. market, but within a few years they were selling directly to U.S. importers.

In order to survive, Hong Kong brokers invested money into Chinese factories and joint-ventured with Chinese entrepreneurs to start their own exclusive product lines and for their remaining larger customers. With the loss of key personnel, the government provincial export corporations never quite adapted to economic reform, and today most are gone or left selling to domestic Chinese markets.

The 1990s saw the rapid growth of private labels in order for U.S. companies to differentiate their product lines. In the 2000s, China is a basic “free for all,” with small mainland export-broker companies forming and folding each month. Additionally, separate factories are attempting to bypass historical channels and selling directly to U.S. importers. Each week American companies receive a half dozen e-mails or fax communications asking for the American companies to place orders directly with some small new and obscure factories that would like to begin exporting to the United States.