Revenge of the Sith

Exactly what I expected; a piece of garbage.

Can’t say I was disappointed, though. After all, I got over that one back in ’99. But really, it was simply too much of the same nonsense that ruined the saga in the first place: pointless Counsel meetings, Chancellors, Diplomats, Senators, Ambassadors, Republics, Democracies, Trade Federations, etc.

It’s like, where’s the bad guy in the black hat?

The first three Star Wars flicks were rooted in the very fundamental and universal theme of Dualism. Like any good western. It didn’t really matter *why* things were happening. All we knew is that the bad-ass Vader was sending probes out looking for white-wearing Rebels on the snow planet, and it was critical that they not be found. Otherwise, there would be hell to pay.

So where did it all go wrong? How? Why?

Simple. In 1999’s “The Phantom Menace”, Lucas dumbed down the sense of evil so severely that you don’t even care if the heroes prevail or not. In fact, it’s not even clear what the threat is. In contrast, the first three releases (OK, two and a half) were driven by the undeniable presence of Badness, supplemented by the war that ensued between this dominating Badness and the Rebels who represented that which is Good.

While this all apparently hit rock bottom in 1999, the 2002 release of “Attack of the Clones” made it even worse. Particularly in Lucas’s depiction of Anakin Skywalker, the man who would become one of the darkest characters we, or at least I, have ever seen in a movie. The casting of Anakin from Day 1 was a miscalculation of the saddest sort, and literally changed the character of Darth Vader into something less than what he is to true Star Wars fans.

Lucas’s depiction of Anakin, who is eventually supposed to evolve into the epitomy of that which is evil, seemed to come from a galaxy even farther away. One of the first errors Lucas made was his choice to introduce us to Anakin when he was eight years old. To do this right, Episode I really should’ve began when Anakin was the same age of Luke in Star Wars; just before college age, facing all the life decisions we make at that pivotal point in our lives. As Episode’s II and III unfold, we should’ve seen Anakin grow from a young man with lots of potential into a seasoned Jedi who’s been around the block a few times, making the thought of his turn to Darkness a realistically frightening one. It so follows that Amidala should not have been the hot babysitter figure in “Annie’s” life, but rather the young girl of royalty that the preoccupied Jedi Anakin didn’t really notice until *she* came of age and blossomed into a woman in Episode II. With all these pieces in place, this could’ve been one of the most beautiful love stories in cinematic history.

Anakin, as George depicts him in the recent three episodes, is simply incapable of the evil that Vader represents in the first trilogy. Age has a lot to do with it. What’s especially unfortunate is that the story of Anakin and his fall to the Dark Side is something that could’ve been one of the most powerful and representative stories ever told on film, if only the characters on screen were believable. I mean, the baddest I ever saw this Anakin kid get was to stay out past his bedtime and ride his minibike real fast.

Again, the threat isn’t there.

The Vader I remember, driven by his Master, was the most evil soul in the Universe. Evil for the sake of being evil, beyond any sort of rhyme or reason. My Vader was not the corrupt guy looking to weasel a tariff break from the Senator while moving his cargo through the Dagoba System. My Vader simply wanted to bathe in the blood of virgins.

As for the effects being good, well, sure. But after all these years, you’d think that Lucas would take what Spielberg learned from his tech difficulties in Jaws: It’s what you *don’t* see that ends up being the most powerful part of the experience. The art of implication is what tickles the imagination more than anything. Lucas fell on his face in my book with the Cheech Marin floating winged reptile mechanic guy, Jar Jar, the lizard horse from this one, the dog-skulled robot with laryngitis, and so forth. Completely ridiculous. 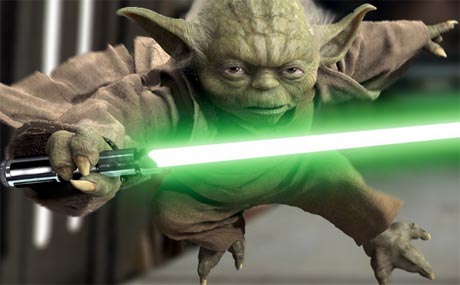 And Yoda. Don’t get me wrong, I probably enjoyed that light saber scene in Clones as much as the next person. But in a “Tom and Jerry” sort of way. Seriously, that scene was arguably closer to something you’d see in a Saturday Night Live skit than in a Star Wars movie.

And Samuel L. Jackson. Please. What, was Travolta not available? Come on.

Oh, and the opening title sequence for the final Episode III: The Revenge of the Sith. That had the be the most unsubstantial piece of storytelling I’ve ever seen anywhere. Is that all George could give us? Horrible. It was the first time I didn’t get a chill up my spine in the beginning of a Star Wars movie.