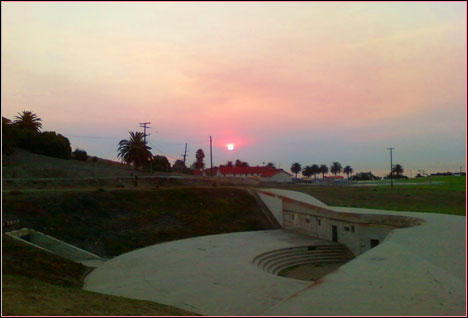 There’s that redder-than-ever sun rising up from the ashes, taken from Battery Farley at Fort MacArthur. Looks an awful lot like the poster from Apocalypse Now, doesn’t it? What’s not clear in this shot is the silhouette of Cleveland National Forest’s mountains separating the beach cities from the inland areas of Orange and San Diego counties. Beyond those mountains, it’s estimated that one million people have been displaced from their homes. =view large image=

Next post: NASA satellite pictures of the California wildfires