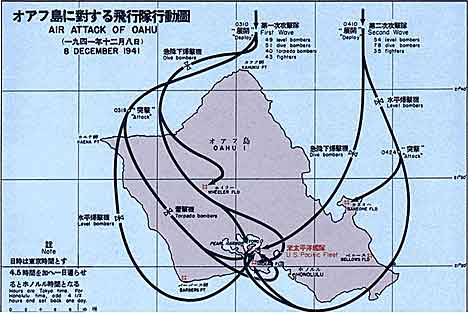 The two attack sorties flown by the Japanese approached from different directions. The U.S. radar which detected them 200 miles (320 km) away was at the top of this map. >> See larger image

The first shots fired and the first casualties in the attack on Pearl Harbor actually occurred when USS Ward attacked and sank a midget submarine at 06:37. There were five Ko-hyoteki class midget submarines which planned to torpedo U.S. ships after the bombing started. None of the subs made it back safely, and only four out of the five have since been found. Of the ten sailors aboard the five submarines, nine died, and the only survivor, Kazuo Sakamaki, was captured, becoming the first prisoner of war captured by the Americans in World War II. Recent United States Naval Institute photographic analysis indicates a high likelihood that one midget submarine managed to enter the harbor and successfully fire a torpedo into West Virginia. The final disposition of this submarine is unknown.

On the morning of the attack, the Army’s Opana Point radar station detected the Japanese force, but the warning was confused with an expected arrival of U.S. aircraft and discounted. Some commercial shipping may have reported “unusual” radio traffic. A number of U.S. aircraft were shot down as the air attack approached; one at least radioed a somewhat incoherent warning. Other warnings were still being processed or awaiting confirmation when the attack began.

The attack on Pearl Harbor began at 07:53 7 December Hawaiian Time, which was 03:23 AM December 8 Japan Standard Time. The Japanese planes attacked in two waves, in which a total of 353 planes reached Oahu. Vulnerable torpedo bombers led the first wave of 183 planes, exploiting the first moments of surprise by attacking the (hoped for) aircraft carriers and battleships while dive bombers attacked the U.S. air bases across Oahu, starting with Hickam Field, the largest, and Wheeler Air Field, the principal fighter base. The 170 planes of the second wave attacked Bellows Field and Ford Island, a marine and naval air base in the middle of Pearl Harbor. The only opposition came from some P-36 Hawks and P-40 Warhawks that flew 25 sorties and from naval anti-aircraft fire. 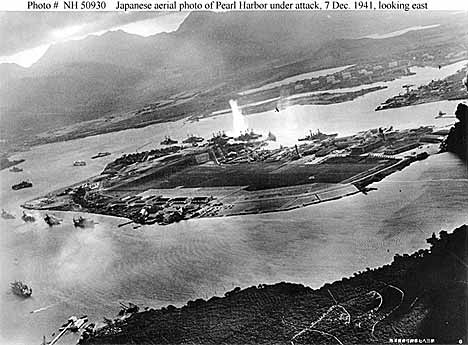 The men on the ships were woken to the sounds of bombs exploding and cries of “Away fire and rescue party” and “All hands on deck, we’re being bombed”. Despite the lack of preparation, which included locked ammunition lockers and undispersed aircraft, there were American military personnel who served with distinction during the battle. Rear Admiral Isaac C. Kidd, and Captain Franklin Van Valkenburgh, commander of Arizona, both rushed to the bridge of Arizona and directed the ship’s defense, until both were killed by an explosion in the forward ammunition magazine, caused by an armor-piercing bomb strike next to one of the forward main battery gun turrets. Both men were posthumously awarded the Medal of Honor. Ensign Joe Taussig got his ship, Nevada, under way from a dead start during the attack. A destroyer got under way with only four officers onboard, all ensigns, none of whom had more than a year’s sea duty. That ship operated for four days at sea before its commanding officer caught up with it. Captain Mervyn Bennion, commanding officer of West Virginia, calmly led his men in battle until he was cut down by shrapnel from a bomb hit aboard Tennessee, which was moored alongside West Virginia. Probably the most famous hero is Doris “Dorie” Miller, an African-American cook on West Virginia, who went beyond the call of duty when he took control of an unattended anti-aircraft gun, for which he had no training, and used it to fire on the attacking planes, downing at least one, even while bombs were hitting his ship. He was awarded the Navy Cross. In all, 14 sailors and officers were awarded the Medal of Honor. A special military award, the Pearl Harbor Commemorative Medal, was later authorized to all military veterans of the attack.

Ninety minutes after it began, the attack was over. 2,403 Americans had lost their lives (of which 68 were civilians — many of whom were killed by American anti-aircraft shells falling back onto Honolulu), and a further 1,178 were wounded. Eighteen ships were sunk, including five battleships[2].

Nearly half of the American fatalities – 1,102 men – were caused by the explosion and sinking of the Arizona. It was destroyed when a converted 40 cm shell, dropped from a high altitude level bomber, smashed through its two armored decks and detonated the forward main gun magazine. The hull of the Arizona became a memorial to those lost that day, most of whom remain within the ship.

Nevada attempted to sortie seaward, but was ordered to beach itself to avoid blocking the harbor entrance. Already damaged by a torpedo and on fire forward, Nevada was targeted by many Japanese bombers as it sailed away. It sustained more hits from 250 lb (113 kg) bombs as it beached.

California was hit by two bombs and two torpedoes, and the crew may have kept her afloat if they had not been ordered to abandon ship just as they were raising power for the pumps. Burning oil from the Arizona and the West Virginia was drifting down on her. The disarmed Utah was holed twice by torpedoes. West Virginia was hit by no less than seven torpedoes, the seventh tearing the ship’s rudder away. Oklahoma was hit by four torpedoes, the last two impacting above its side armor belt. Maryland was hit by two of the converted 40 cm shells, but neither caused serious damage.

Although the Japanese concentrated on major battleships, they did not ignore other targets. The light cruiser Helena was torpedoed, and the concussion from the blast capsized the neighboring minelayer Oglala. Two destroyers in dry dock were destroyed when bombs penetrated their fuel tanks. The leaking fuel caught fire and flooding the dry dock only made the oil rise, which burned out the ships. The light cruiser Raleigh was hit by a torpedo and holed. The light cruiser Honolulu was damaged but returned to service. The destroyer Cassin was capsized, and Downes, also a destroyer, was heavily damaged. The repair vessel Vestal was heavily damaged and beached. The seaplane tender Curtiss was damaged.

Almost every one of the 188 American aircraft that were destroyed and 155 that were damaged were hit on the ground. Attacks on barracks killed additional pilots. Friendly fire brought down several planes. Fifty-five Japanese airmen and nine submariners were killed in action. Of Japan’s 441 planes (350 took part in the attack), 29 were lost during the battle (nine in the first attack wave and 20 in the second wave) and another 74 were damaged by flak and machine gunfire from the ground. Over 20 of the aircraft that safely landed on their carriers were irreparable.