My grandparents were from Hawaii, and would visit Las Vegas several times a year. It was their favorite playground. Each visit to the mainland they’d be sure to stop in L.A. for a few days to hang out with us, take us to Disneyland and Knott’s Berry Farm, and so forth. Good times. The best.

They had some close friends who lived in Vegas: a couple named Don and Pearl. The four would get together all the time in both Hawaii and the mainland, and there were many occasions when they’d find themselves at our place L.A. for dinner. After dinner the four would clear the table, put a tablecloth down, and get their usual poker game going. I’d stay up past my bedtime, watching. I remember finding the whole situation very intriguing. I must’ve been in pre-school.

Don and Pearl both have long since folded, as has Grampa.

I can’t remember not knowing Don and Pearl. They basically represented anything and everything you could ever hope to expect from a fiftysomething couple from Vegas in the seventies. Pearl was such a cool lady, always sporting something that looked like it was straight out of Mrs. Roper’s wardrobe. She had a deep, raspy voice, with piercing eyes that other kids would probably find frightening. I can still remember her smell: an oddly comforting melange of perfume, alcohol, and cigarettes. Grandma still tells me how much Pearl loved me!

This photo was taken at my grandfather’s surprise 60th birthday party at the Kahala Hilton on Oahu in 1976. It’s one of several priceless photos my grandmother gave me last night. (More to come.) 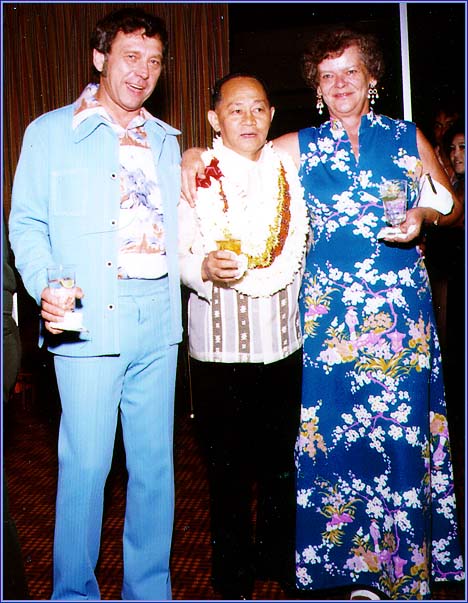 I love this picture. I’m not sure if you can get more classic than this; its classicness is so accessible you almost don’t even need to know them. Check out Don. Looks like something straight off the set of the Six Million Dollar Man. We can’t see his shoes, but I can assure you we wouldn’t be disappointed.

What an enjoyable trip it would be to have a drink with Don and Pearl today. Rest in peace, guys.