Interviewer: Can you explain jazz?

Yogi: I can’t, but I will. 90% of all jazz is half improvisation. The other half is the part people play while others are playing something they never played with anyone who played that part. So if you play the wrong part, it’s right. If you play the right part, it might be right if you play it wrong enough. But if you play it too right, it’s wrong.

Yogi: Anyone who understands jazz knows that you can’t understand it. It’s too complicated. That’s what’s so simple about it.

Interviewer: Do you understand it?

Yogi: No. That’s why I can explain it. If I understood it, I wouldn’t know anything about it.

Interviewer: Are there any great jazz players alive today?

Interviewer: What is syncopation?

Yogi: That’s when the note that you should hear now happens either before or after you hear it. In jazz, you don’t hear notes when they happen because that would be some other type of music. Other types of music can be jazz, but only if they’re the same as something different from those other kinds.

Yogi: I haven’t taught you enough for you to not understand jazz that well.

Grabbed a solid koa Imua tenor ukulele in Kona last year and have been sitting down with it this summer. Picking up the uke has always been something I’ve wanted to do. Needed to do. We were both born in Honolulu, after all. (Its ancestors can be traced to Portugal.)

Music was my major in college, and all that theory’s still very much alive in my brain, so it’s been fun to revisit the stuff and apply it to this magical little instrument. I’ve never picked up the strings before, so the finger positions are all very new and awkward to me right now. But at least the theory’s out of the way.

One of the first things I’m determined to get into the muscle memory is the classic Hawaiian I-II7-V7-I vamp in all keys. Working through the circle of fifths recently, I read about an exercise that travels clockwise around the circle in a progression that takes you around the thing in logical laps. All you need to do is add the I7 to the end of the main vamp, and it’ll pull you to the fourth immediately adjacent in the clockwise direction, landing on the new I. Modulation via secondary dominant sevenths and all that.

I’ve been doing these types of laps around the circle, using separate diagrams as my finger guide. Yet since I’m still such a uke baby, the roads between my brain and fingers aren’t paved yet. Too much energy is spent just digging through the files in my memory bank and looking for the next finger position.

So I put the thing on grid. It allows you to through the first row, then the second, … all the way down to the the twelfth, then back to the top, effectively cruising counterclockwise around the circle of fifths indefinitely using the Hawaiian vamp. (Study the grid for a moment and some patterns will become beneficially apparent to you.)

Have fun with it. And aloha.

Ukulele I-II7-V7-I-I7 progression for counterclockwise laps around the circle of fifths:

Thirty years after the events of the 1984 All Valley Karate Tournament, Johnny Lawrence’s life has taken a rocky turn as he tries to forget a past that constantly haunts him. He seeks redemption by reopening the infamous Cobra Kai karate dojo. But the LaRusso-Lawrence rivalry of yesteryear is reignited when their lives become intertwined with the next generation of “karate kids.”

Daniel Larusso’s side of the story – Episode 2 – “Strike First”:

Present day Daniel LaRusso lives a charmed life. That is, until he sees that the Cobra Kai dojo, the source of his teenage angst and rivalry, has been reestablished by Johnny Lawrence. Struggling to launch the business, Johnny starts teaching karate to his teenage neighbor Miguel. Daniel faces his former opponent and old offenses are quickly reignited. My bro Larry Smith just sent me a surprise copy of a 2018 daily calendar called Secrets To Happiness In Six Words: Writers Famous And Obscure On Love, Sex, Money, Friendship, Family, Work, And Much More. Now available on Amazon.

You’ll find me on October 17. A Wednesday. Hopefully the Dodgers will have a lead in the NLCS and be gearing up to kick off a World Series that weekend. 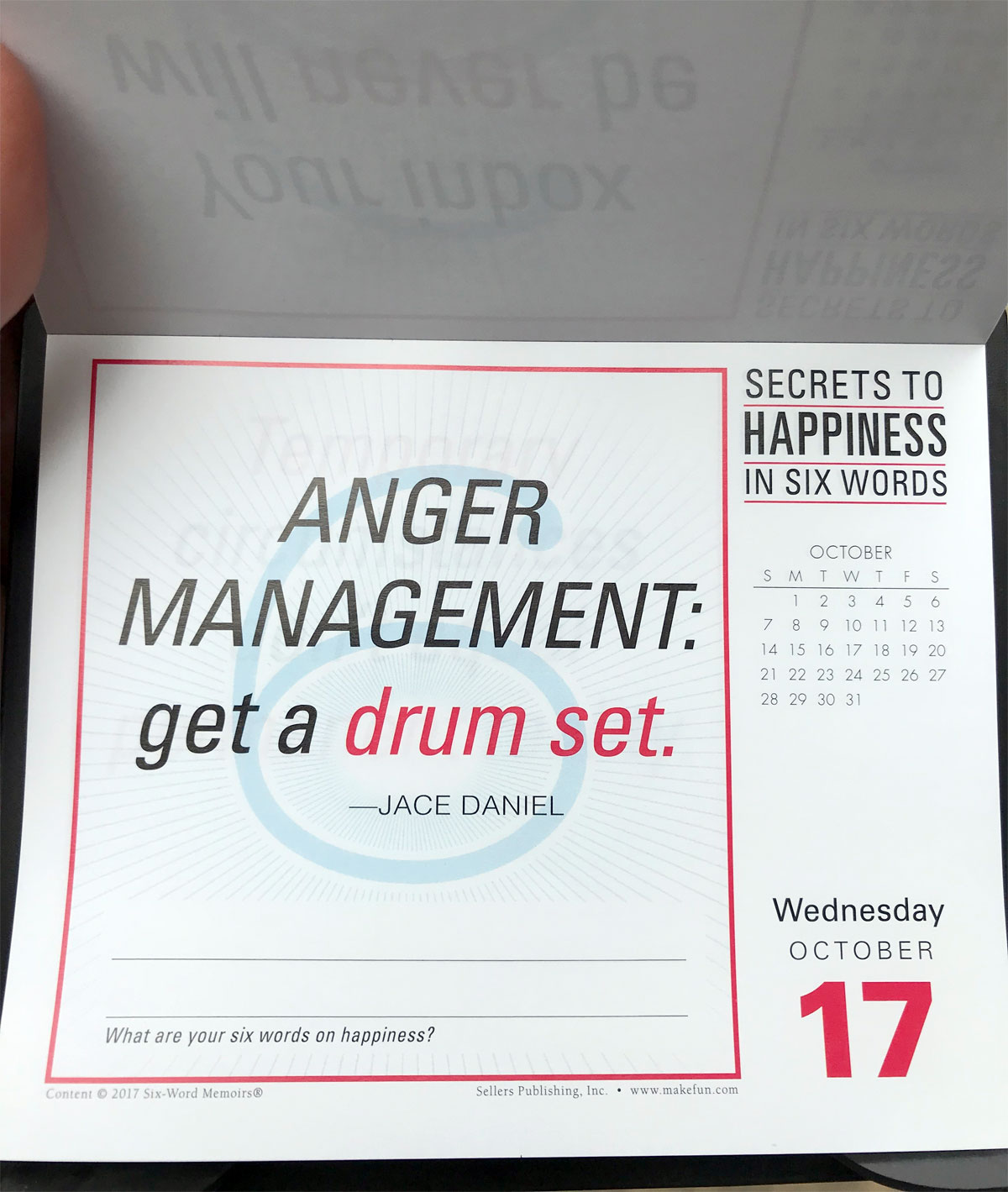 ANGER MANAGEMENT: Get a drum set.

For more info on the best-selling Six Word book series and to add yours, visit the Six Word Memoirs official site. And check out Smith Magazine for all things word.

Roxanne sped up 5% every time they sing Roxanne

I dare you not to smile. (via Thane)