The other day I blogged the story of How I Met Mick. Since there are always two sides to any story, M has offered to pen her own version and have it posted here on jaced.com. 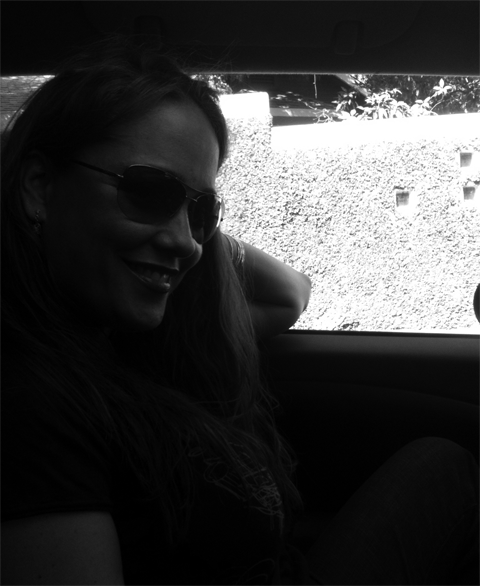 How We Met
by Milena

One day at work in October 2008, I was thinking of the cool Barbie clothes I used to have. Probably because I was looking at the dress-up Barbie program my law partner Lori had on her computer for her daughter. While growing up in LA, my mom used to take me to a store called Fedco about once a month; they had a wall of Barbie clothes. My favorite was a leopard Cher look. I had only one Barbie, but she had a closet full of options. So that day I thought, hey, what ever happened to Fedco? I’d never heard of anyone reminiscing about Fedco. Did it even ever exist? Was it my imagination? I loved that place.

These days, you don’t have to wonder anything for very long. So, off I went to Google Fedco: “Fedco Gemco Zody’s 1970s Los Angeles”…

Not one to scroll to Page 2 of the Google search results, I found a site on the first page that seemed to fit the bill, www.jaced.com. Oh, yeah. This guy had all the good stuff: Dolphin shorts, Carpeteria, Sigmund and the Sea Monsters, etc. So, those things DID exist at some point! I had just started getting into Facebook, so while I was there surfing jaced.com, I requested his friendship. He definitely seemed like a type who’d entertain me.

Soon thereafter, we were virtual friends, and for the next few months I looked forward to his musings, rants, recollections, and Quick Polls. Quick Polls were my favorite: Apple sauce or Jello? Beach or mountains? Zeppelin or Sabbath?

Then, one day, the Quick Polls stopped. I think it was the end of January 2009 when I posted on his page, “Hey! Whatever happened to the ever-popular Quick Polls?” (I felt a little embarrassed since I didn’t know him, and he seemed cool, and I’m a geek.) He soon responded with a doozy. Then, I threw one back at him, “Stale potato chips or burnt popcorn?” Yeah, I can play.

A few months went by. I continued seeing his posts. Then, one day, he posted something about San Pedro. San Pedro! I didn’t know he lived there. My dad lives there. Who lives in San Pedro? NO ONE. Nothing is in San Pedro, especially a smart, hip, funny guy. So, being a forward kind of gal, I sent him a message telling him I would be in Pedro visiting my dad and step-mom, and asked him where a decent girl would get a drink around there. He gave me a few names of nice places, and a dive – Harold’s. Then, he suggested we could meet for a drink. (Or, maybe I imagined that.) Anyway, we set a time, and I picked the dive bar. A perfect adventure.

On May 17, 2009, I spent the afternoon with my family, and then called Jace D. Albao. (I’m embarrassed. I don’t wanna tell this story anymore.) He didn’t pick up the phone, but I left a message saying, if he was busy, that was ok, I was headed towards the freeway. He immediately called back.

We met at Harold’s. This was a part of Pedro I didn’t know. In fact, I didn’t know anything about Pedro; I simply drove down from Hollywood, and straight from the freeway to my dad’s. Never stopping. Next thing I knew, I was parked in front some seedy dive bar called Harold’s and thinking to myself, I don’t know this guy, no one knows where I am, I’m totally nuts. So, I leaned back in my seat, listening to classical music, trying to calm my nerves…

I got out and took a look at him. I didn’t know what he looked like; you couldn’t tell from his Facebook photo, and I hadn’t even delved into his other photos. This wasn’t what I expected. He was good-looking, confident, and serious. I don’t know what I was expecting. Maybe a little snarky whipper-snapper. Maybe someone with a reddish henna tint to his hair. Maybe someone a little husky. Definitely, a young guy not to be taken seriously.

But no. This was a grown man.

As we walked into the bar and ordered a drink, I noticed how confidently he moved. He also reminded me of an octopus – the long tendrils of black seaweed-like hair, long limbs, and fluid movements. He struck me as very gentlemanly. But, he was wearing a grey tank-top. (What guy has the nerve to walk around in a tank-top!) He didn’t seem impressed by me at all. Although I hadn’t intended to impress this stranger, I had applied some sparkly bronzer. That was sure to create a buzz, no?

I started relaxing as we found we had things in common: tastes in movies, middle names (Daniel/le), married at 24/divorced/no children, interest in numbers.

After a few rounds of him beating me at pool, we sat down and talked about his project – Under Angels. He was really into this story, giving me many details. I felt like I was missing something because he was talking with me as if I were familiar with the story. I just nodded my head, following his octopus arms and fingers flying all over. When he was talking, he kind of used a different voice, an office voice. Kind of like a geek which totally didn’t go with his appearance. He explained that there was a scene in his story that was to take place at Harold’s. He wasn’t quite sure what would happen, but knew something important. Just moments after this conversation, there was an earthquake. The bottles shook, and the people whooped it up. I grabbed on to one of his tentacles.

While he was super excited about this event fitting into his story, I was thinking: Where am I? Who is this guy? What happens if the roof collapses and no one knows where I am? I’m so far from home. “I have to go.”

He walked me to my car. I said I’d take him for drinks if he ever came up to Hollywood, although I knew he wouldn’t. He gave me an affectionate kiss on the cheek. And, I left. Relieved. I had thought that I would be in control of this meeting, but from the moment he knocked on my car window, I knew I wasn’t.

That night I had a really vivid and strange dream about him. Basically, if I wanted to hang with him, he told me I’d have to play his way. And, his way was too uncomfortable to me. I tried to be cool like him, but I just couldn’t. That dream stayed with me for a while. I couldn’t get him out of my head. So, I started going through all his videos (see Video Confessional Jams). Yes, all 100+ of them. He was so likeable and funny, and cute! I sent him a message that I was coming down to see my dad again, and did he want to get together for drinks again and stuff. Yes. Yes.

I was really looking forward to seeing him, and meeting his dogs. After visiting my family, I called him and he directed me to his place – not even 3 minutes away, I could have walked there. I knew what to expect. I knew what his place looked like from all the videos. It was a beautiful, sunny, breezy day so the front door and windows were open. I walked on in with my bottle of tequila. It looked exactly as I had imagined. And, there he was standing with a smile, behind his bar. I don’t know what music was playing, but it was perfect (the Beatles?). This time, I thought I’d hang with a friend. Much more relaxed.

We did hang, and talked for hours. I remember looking at him as we were sitting on his back steps, and thinking I could be really good friends with this guy. It seemed as if he were a childhood friend. Then, I started assessing his house and yard. We could be using the yard a little better. We constructed a bench in the corner of his yard, hidden behind the avocado tree, from an old door, a table top, and a futon, I think. By this time, it was night. We lounged on the new bench, looking up at the stars. He was lying on on his back. He looked at me. I leaned down and kissed him. He was fine with that.

A few years earlier, I had written a list of things that make up the perfect guy for me: Dark hair; edgy, but very sweet; frighteningly intelligent; loves animals; enjoys the small things in life; affectionate; likes the way I look; has a big family (with a sister I could love); generous with his attention toward me; speaks another language (music counts); employed. While my friends told me that I was too picky, I would have preferred being alone than settling for less than exactly what I wanted. Someone up there was listening, and decided I deserved exactly what I had wished for…and then some.

I never understood the purpose of marriage before now. I thank my friends, my family, and cosmic forces for helping me get to this point in life.