Take me to your floor sander.

I’m flattened. Outside of a Hermosa hang for Naylor’s 39th last night, I’ve spent pretty much every waking hour since Friday evening sanding the floor down by hand with what now feels feels like an extension of my right arm, the Ridgid R2720 3×21 Belt Sander.

Friday night and most of Saturday involved extra-coarse 36 grit, taking down the high spots. That was a grind. Then I moved to 50 grit, running my buddy over the entire thing, taking off the stain. Although the stain ultimately came off, the pre-staining exercise actually proved to be a good thing, as the stain gave me a point of reference on the joints. For instance, if I was sanding on a joint, and the stain from one of the squares was unaffected, I knew that the adjacent square was a bit higher, and needed to be sanded down a bit. When the stain of a square became affected by the sander at the joints, I knew it was pretty much level with its neighboring squares.

I finally got to the point this afternoon where I figured to take a much needed break, and save what’s left of my energy for next Saturday, where I’ll rent the monster multi-hundred pound drum sander. I’ll just have to live in squalor until then, leaving the plastic up, and relinquishing use of the front door for a week. The idea with the Ridgid was to get the most obvious high stuff down, which gives me more control than a large machine would. Relying on the large machine to take down those key areas could lead to larger problems than you’re trying to solve.

Going big last night, I woke up on about four hours sleep and sanded until 3pm. Had some breakfast, then collapsed into a nap. It was that whole “wake up from a nap at a dusky 7:39pm and momentarily think it’s 7:39am” thing. The lower body’s killing me right now. I think I’ll spend the rest of the night sitting in a hot bath and reading the last hundred pages of Angels & Demons. That kicked off excellently, then started bottoming out in the middle, and finally got going at about page 300. Now it’s hard to put down as I approach the stretch. I’ve enjoyed it, but I feel like the story could’ve been told in 300 pages, not 550. And now the few conscious brain cells I have left are informing me that I’ve taken this whole blog entry on the type of tangent that one only goes on as a result of UTTER EXHAUSTION. 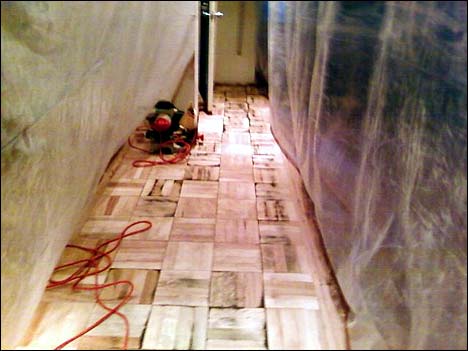 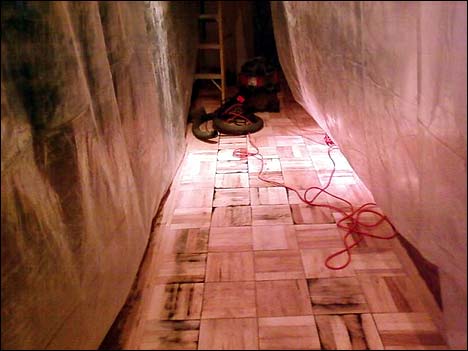 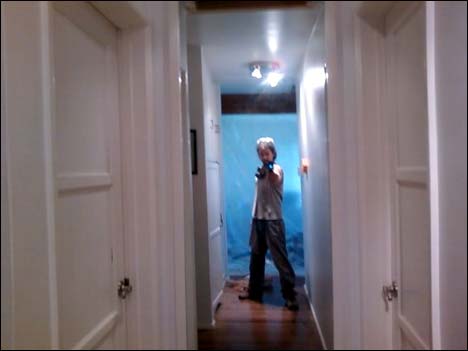