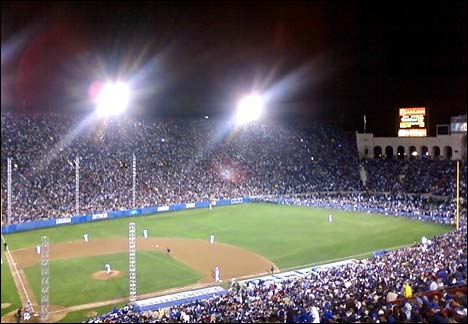 Last night, to commemorate the 50th anniversary of calling Los Angeles home, the Dodgers played an exhibition game against the Boston Red Sox at the Los Angeles Coliseum located several miles south of downtown. For those who don’t know, the Dodgers played their games at the Coliseum in South Central Los Angeles for their first four years here (’58, ’59, ’60, and ’61) while their permanent home at Chavez Ravine was being built just north of downtown.

And so we rallied, braving traffic, parking fees, and the scalping scene to take in the experience. What a trip. A gummer in the hood! We joined 115,000 other people with the same idea, packing the Coliseum to capacity. That’s like packing Dodger Stadium more than twice. To quote KFWB News: “Not since the Christians were thrown to the lions has the Coliseum been this full.”

Two of the first things we noticed were the glaring absence of Dodger Dogs (replaced by bratwursts; did the Farmer John deal come after 1961?), and a left field that looked smaller than my backyard. With this set-up, the Left Fielder assumes more of a Rover role, which most of the time equated to having three middle-infielders.

The photo above was taken from our scalped seats on the southwest curve of the venue. I imagine this is what it looked like fifty years ago, although, if I’m not mistaken, they didn’t play night games back then. I also doubt they ever drew 115,000 people to one game. And I guarantee you beers weren’t ten bucks a pop.

And yeah, I kept expecting the Trojan horse guy to come galloping out at any minute.