Was tooling around with some tasty ideas on the djembe today and figured on writing them down as an eight-bar groove for referencing later. I’ll video it when I have my camera lady available.

I’ve found that traditional African syllabatic dictation doesn’t really connect well with my mind. I tend to see the music better with classical dictation. So (click image for large version): 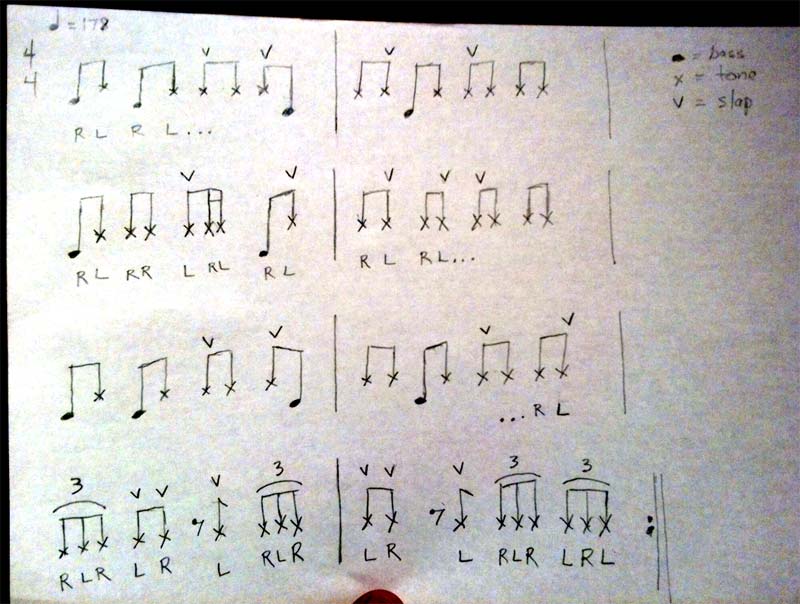 The first two bars are a simple syncopated groove between bass and tone. Home base. This one’s rooted in the Amen Break. Embellish the funk out of it as needed.

Bars 3 and 4 have a trippy sort of flip-flop thing happening between L and R, with accents on the upbeat across Bar 4. Notice the paradiddle at the beginning of Bar 3, setting up the sixteenth notes that’ll bring you back to your lead hand on the downs.

Bars 6, 7, and 8 have a cool sort of over-the-bar displaced triplets thing going. Been playing with that riff a lot. Great for soloing. Endless applications. Play with it and you’ll see.

NOTE: I’ve got the tempo at 178bpm for dictation purposes only. It actually feels half that (i.e. four bars at 89bpm), but it’s easier to write it down in double time.

Next post: Only known video footage of Mark Twain