Earlier this month, a couple people informed me of a writing project called Significant Objects and its associated contest conducted by Slate Magazine. The purpose of the contest was to take a worthless object — in this case, a BBQ sauce jar — and write a short story (500 words or fewer) in which the object plays a significant role.

A great exercise. Just hours before the deadline (I think I’d just watched the Dodgers blow Game 4 of the NLCS) I decided to sit down and see what I could come up with. Pressed for time and not exactly in the mood to start from scratch, I ended up re-imagining an old piece I’d already written a year or two ago, tweaking a few things to fit the exercise. Feeling as though I was slightly cheating, I reminded myself of one of Hitch’s quotes, “Self-plagiarism is style.”

Today the winner was announced. You can read that entry here.

For the archives, here’s what I offered: 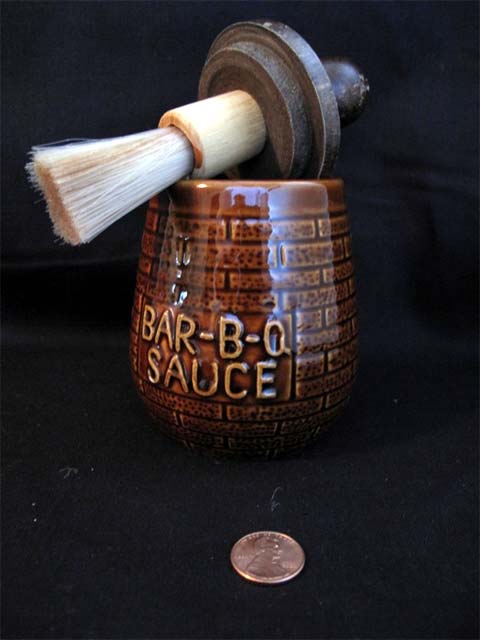 Once upon a time, in a world much like ours, there lived a jar of glue. Not your ordinary jar of glue, mind you; not the kind with with a shiny label and a fancy logo. This jar of glue was different. It was made of clay, and was labeled BAR-B-Q SAUCE.

Over time, the world changed, and breakable things were replaced by unbreakable things. Things that were real and vulnerable became things of the past, and the world was full of fake, plastic, less-than-precious things. The jar of glue’s purpose began running low, and it began to feel unimportant.

Determined to keep its purpose alive, the jar of glue went searching. Before long, it met a young dish.

“What do I need you for?” the dish replied. “I’m unbreakable. Besides, I really don’t like barbecue sauce.”

Judged by its shell, the jar of glue continued searching. Before long, it met a vase.

“What do I need you for?” the vase replied. “You can drop me on the hard floor and I’m fine. Besides, I really, really don’t like barbecue sauce.”

Judged again by its shell, the jar of glue continued searching. Before too long, it met a bowl.

“What do I need you for?” the bowl replied. “I’m cheap, and can be easily replaced by bowls exactly like me. We all come from the same mold. Besides, I really, really, really don’t like barbecue sauce.”

“If only I could find one last thing that needs me,” the jar of glue said. “So that my purpose does not go to waste.”

Before too very long, as if by plan, the jar of glue met a heart. Not a fake, plastic, less-than-precious heart, mind you. Not the heart on greeting cards. This heart was real. And it was broken.

The jar of glue poured its purpose into the fractures of the heart, filling every crack with its saturated brush, applying a second coat for extra durability.

“Thank you,” said the heart.

“No, thank you,” replied the clay jar labeled BAR-B-Q Sauce.

And from that day forward, the heart was stronger than it had ever been before.

Next post: Either is, neither is: rules are rules