Wedding Crashers vs. The 40-Year-Old Virgin 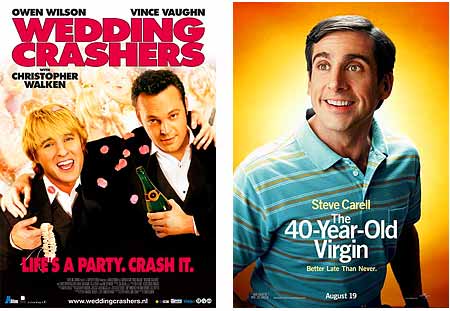 Two comedies took the theaters by storm this year: Wedding Crashers and The 40-Year-Old Virgin. I caught Virgin on DVD a few weeks ago, and recently watched Wedding Crashers. Ask anybody who’s seen both which one they preferred, and you’ll find that there are two distinctly different camps.

Both films are comedies that push envelopes, and both enjoyed huge box office success in 2005. It’s only natural to draw comparisons between the two. Here’s mine:

On paper, in concept, Virgin already makes me laugh. It’s smart. The idea of a 40 year old action figure collecting virgin who hooks up with a hot grandma with an eBay store is hilarious. Period.

Wedding Crashers, by comparison, is just a vehicle for Vince Vaughn to do what has now become his thing, which I guess has a certain value to Vaughn fans (which I am). However, when you take Vince out of the picture and examine the piece on paper for what it is, it’s just a drawn out hand job under the dinner table joke. I can’t think of anything about the arguably cheap story on paper that strikes me as funny. Wedding Crashers, underneath the performances (Will Ferrell’s moments are side-splitting), is really nothing more than an edgy chick flick. How Ben Affleck and J-Lo weren’t in this movie, I’ll never know. Maybe they have standards.