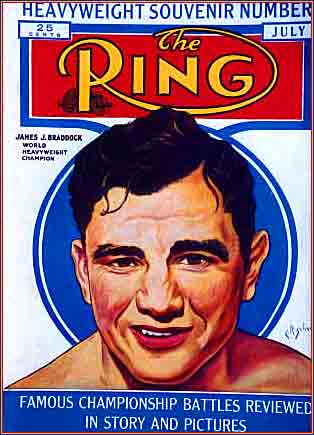 Had a ball. Didn’t even make it home before midnight.

Excellent fact-based account of everyman Jim J. Braddock, a heavyweight prizefighter from New Jersey in the 1920s and 30s. The film begins in 1928, with Braddock in his prime, making good money, enjoying celebrity status, and living with his wife in a nice house while raising their young family.

We then jump five years into the future, the main stage of the film, which takes place during the Great Depression. The Braddocks have lost everything in the stock market, and are now raising their three kids in a small apartment in the city during a time when it was a luxury to dine on fried baloney and drink milk that hasn’t been diluted with tap water. Times are hard for the country, work is scarce, and Jim continues to box through injury out of financial necessity. His boxing performance takes a dive, as does his career. He quickly dwindles into chump status.

In 1935, circumstances gave him a second chance, landing him an opportunity to fight the younger World Champion Max Baer for the title. The rest is history.

Cinderella Man is an outstanding flick on several levels, with Oscar written all over it. A great sports movie, a remarkably entertaining period piece, and a mechanically beautiful one to watch.

Ron “Opie Cunningham” Howard seems to be at the top of his game these days. The guy really knows how to cut a film. Very sharp, effective stuff. I can’t wait to see what he does with The Da Vinci Code, due out in 2006.

Performances: Crowe does his thing here, which is always good. I’m not a fan of Renee “Lemongrille” Zellweger for reasons that go beyond this review, so I’ll save those expressed opinions for a rant in the future. However, I did manage to look past her presence long enough to enjoy the film as a whole.

And Paul Giamatti as the trainer. Need I say more? I mean, really. Who doesn’t love this guy?