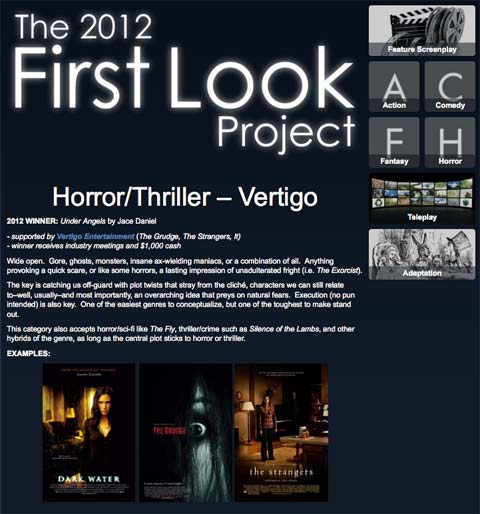 The First Look Project, presented by Script Pipeline, aims to fulfill the current requests of studios by finding new, high-concept material that can be adapted for film or television among four categories: Feature Screenplay (4 genre divisions), Teleplay, and Adaptation.

With the support of Vinson Films, Green Hat Films, Heyday Films, Benderspink, and Vertigo Entertainment, the goal of the competition is to present the best scripts and ideas to major companies. The winner in each category receives personal development assistance and meetings with top producers to discuss potential production. Any genre, any budget, and anyone can enter—both amateur writers and those who have been produced or published. Agent representation is supported by Paradigm.

2012 WINNER: Under Angels by Jace Daniel

– supported by Vertigo Entertainment (The Grudge, The Strangers, It)
– winner receives industry meetings and $1,000 cash

Wide open. Gore, ghosts, monsters, insane ax-wielding maniacs, or a combination of all. Anything provoking a quick scare, or like some horrors, a lasting impression of unadulterated fright (i.e. The Exorcist).

The key is catching us off-guard with plot twists that stray from the cliché, characters we can still relate to–well, usually–and most importantly, an overarching idea that preys on natural fears. Execution (no pun intended) is also key. One of the easiest genres to conceptualize, but one of the toughest to make stand out.

This category also accepts horror/sci-fi like The Fly, thriller/crime such as Silence of the Lambs, and other hybrids of the genre, as long as the central plot sticks to horror or thriller.