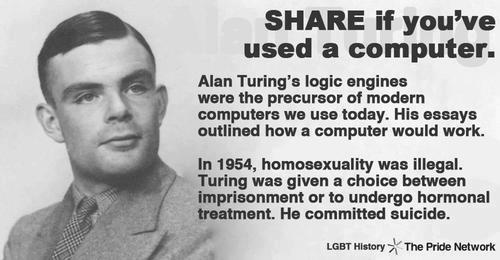 Pssst! In honor of Alan Turing’s 100th, the Kindle version of Under Angels will be FREE until midnight. GET IT HERE.

For those unfamiliar with the synopsis, Under Angels is a ghost story about a WWII codebreaker who gets driven to suicide. The tale takes place in an extension of Alan Turing’s universe, and all you computer geeks and WWII buffs will get a particular kick out of the subtle nods to Alan.

“Many encryption devices have been designed throughout Man’s history in order to facilitate secret communication, from the ancient Greek scytale to the digital signatures used on the Internet today. One of the most famous encryption machines is the Enigma machine, invented by a German engineer and used by Nazi Germany to encrypt military communication before and during World War II. The Germans placed lots of confidence in the security of the Enigma, and considered its encrypted messages too sophisticated to be decrypted by their enemies.

They were wrong. Led by a British genius named Alan Turing, an elite group of minds worked together behind closed doors to successfully reverse-engineer the Enigma system, figuring out how the machine worked. Critical Nazi messages were intercepted by the Allies and deciphered by these brilliant minds, ultimately leading to the fall of the Nazi regime and the Axis powers.”