Dog lovers, check out this great story on NPR.

From walking the perimeter to rooting out bombs, military working dogs have a long rich history protecting American service members. Now, one man is dedicated to honoring these dogs of war.

Back in the late ’60s, Larry Chilcoat dropped out of college and listed in the Air Force as the war in Vietnam was escalating. He trained as a security officer and was assigned to Cameron Air Base. There he met Geisha, the military working dog he would be with for the next year.

“Geisha was just about as cool and smooth as you could imagine a dog,” Chilcoat remembers. “She was a German shepherd, about 75 pounds, and worked entirely on command.”

The two patrolled the base perimeter together, and Chilcoat says having Geisha by his side helped him get through the war.

“I didn’t have to do it alone. While I was out protecting, I was in fact being protected.”

Chilcoat and other vets have gotten approval from the Defense Department and Congress to build a memorial at the Army’s Fort Belvoir in Virginia and are now trying to raise the money to realize their dream. They have just a little more than $25,000 collected so far. Even though that’s just a fraction of the total cost of the project, Chilcoat remains optimistic. He and his fellow vets hope to have the monument complete by Memorial Day 2012.

Read and listen to the full story on NPR here. 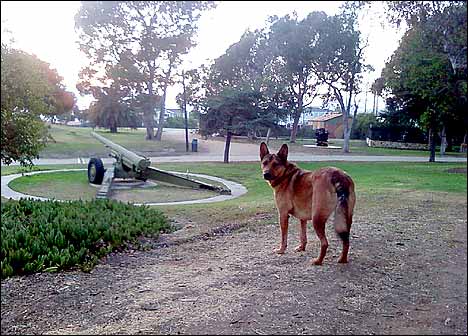