M’ites just nabbed this last week as a surprise. We’ve been on a recent Clue kick, and stumbled upon Hitchcock’s similar-looking Why title in one of the catalog inserts inside a vintage Password game (home version) I’ve got laying around. She looked Why up, and tracked down an original 1958 version. Delightful! 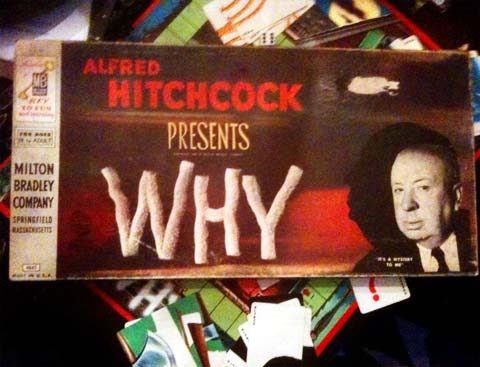 Why is a board game from the late ’50s created by the Milton Bradley Company based on the television show Alfred Hitchcock Presents. The game is no longer produced. There are two different releases of the game: the original 1958 release and the 1967 release, differing only in the box art.

Neither of us had played it before, but it’s great times. Whereas Clue primarily involves the process of elimination (requiring a pen and notepad) in order to determine a victim’s murderer, weapon, and room, Why is more of a combination of Gin Rummy and Concentration, requiring that you declare the identity of a haunted house’s ghost along with the weapon with which they were murdered. Only cards and game pieces are used in Why; pen and notepad not required. This makes for faster play, which is nice. You can do a quick two-outta-three session in about an hour.