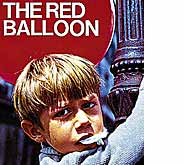 When I was a little boy, my elementary school had a film on-hand that they’d roll for us on rainy days. It was a short French film from 1956 called “The Red Balloon“. I’ve never forgotten it. Only about a half-hour long, the story depicted a schoolboy named Pascal who meets a red balloon during his walk home from school one day. Not just any red balloon, mind you; this was the most beautiful red balloon I’d ever seen. Twice as big as any other balloon, twice as shiny as any other balloon, with a string ten times as thick as that of any other balloon. An unbelievably cool balloon, this one.

Pascal had an affair with this balloon on his journeys to and from school, with the balloon persistently following him everywhere. Not unlike, I suppose, Mary’s little lamb, the red balloon followed him home, but there were no balloons allowed in the house. He followed him to school, but, as was the case with Mary’s lamb, it was against the rule, and the balloon was forced to wait outside. When school would let out for the day, Pascal would take his friend to the park where they could enjoy some quiet time together, albeit limited.

One day after school, the red balloon is meeting Pascal outside. The school bullies become jealous of Pascal, and want the balloon for themselves. A chase ensues, with Pascal clutching the red balloon and running through the streets of Paris, pursued by the balloon-hungry mob. What happens next, I’m happy to discover, is available on YouTube.

Here’s the film in its entirety. Watch, enjoy, and learn:

TRIVIA!: The filmmaker, Albert Lamorisse, is the inventor of the board game Risk.