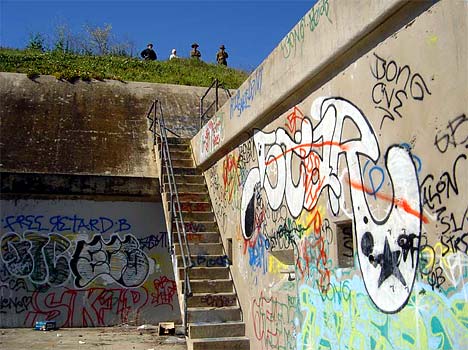 We did a three hour tour of the Upper Reservation at Fort MacArthur (Angel’s Gate) yesterday, which is in our own backyard. On any other day, the dogs and I would have the place to ourselves. This shot’s taken from the pit at Barlow-Saxton.

A great turnout, with about 150 people showing up early on a Sunday morning. As advertised, flashlights and good shoes were required. The tour included stumbling around the dangerous darkness of the underground complexes beneath batteries Leary-Merriam (WWI era) and Battery 241 (WWII era, located beneath the Korean Bell).

The 241 jaunt included an incredibly cool relic that Jaylin found. More on that later.