Ain’t timing everything? Set aside Saturday, June 9, for a day trip to San Pedro. There will be a couple things going on that make for a perfect Pedro day.

First, the USS Iowa battleship is scheduled sail into town and settle into her new home in the Los Angeles Harbor:

The Battleship of Presidents

Built in 1940, the USS IOWA served our country for over 50 years. Designated the “World’s Greatest Naval Ship” due to her big guns, heavy armor, fast speed, longevity and modernization, she kept pace with technology for more than 50 years.

USS Iowa is now transforming to the most interactive and educational museum of its kind and will make its new home in Los Angeles this year. Be a part of this important initiative by joining us as a valued corporate sponsor, volunteer, Plank Owner or all three!

The USS Iowa is making is long anticipated arrival to San Pedro next week. On Saturday, June 9, 2012 it will cruise through the Port of Los Angeles carrying VIP guests. Councilman Joe Buscaino wants you to join him on board. Win passes from the Councilman by clicking “like” on www.Facebook.com/LA15th or by submitting your email on his website www.LA15th.com. Multiple winners will receive sets of four passes for you and your family or friends!

Then, from 4-6 PM, before you head out of town, roll down to the Paseo del Mar bluffs and hit the Under Angels book signing at one of San Pedro’s secret gems, the Corner Store, located just meters away from where the Under Angels story takes place. There’ll be paperback copies of the Under Angels novel, and special wearable gifts for the old men in your life. You do realize it’s Father’s Day the weekend after that, right? 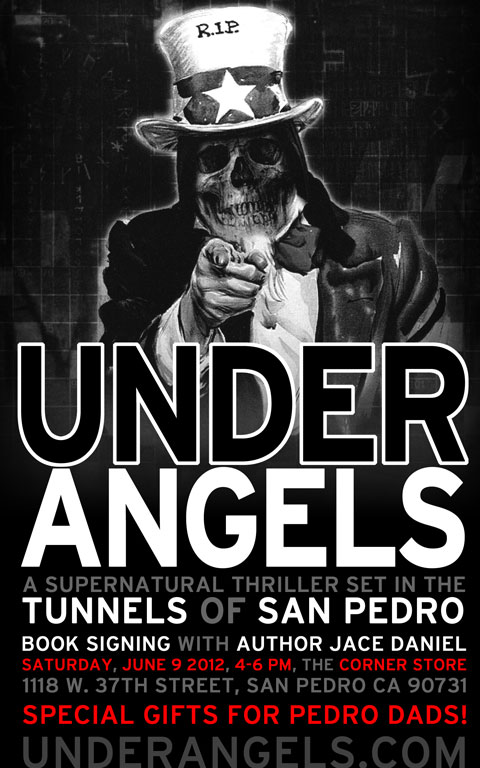 For those who’d rather jump into the tale right now, the Under Angels paperback edition is now available here, and the Kindle version is here. While you’re at it, check out what readers are saying, and like Under Angels on Facebook to stay in the loop.

What’s the connection between the USS IOWA and Under Angels, you may be wondering? From the Under Angels Prologue: