Adam Yauch, known as MCA from the Beastie Boys, has died of a cancerous salivary gland. He was 47.

In 1986/7, I was a senior in high school and wrote for the school’s paper called the Fore n Aft. In the summer of 1986, the San Pedro High School campus was used for the John Hughes film called Some Kind of Wonderful, starring Eric Stoltz, Mary Stuart Masterson, and Lea Thompson. I was taking a chemistry class that summer while they were filming.

In 1987, the film was released, and our newspaper staff received passes to the movie’s premiere at what was then known as the Mann Chinese Theater up here in Hollywood. I went up early with my brother and a friend, and we got in.

We sat about four rows from the back. As soon as the lights went down, there was immediately some kicking, laughing, yapping, and just basic obnoxious noise coming from three assholes immediately behind us who seemed to be oblivious to the fact that they were in a theater full of people. They had distinct Brooklyn accents. We endured the ruckass for the whole movie.

Turned out these guys were a trio of rascals called the Beastie Boys, and were just weeks away from blowing up into the biggest act of the year with their classic album License to Ill. To a layman, people were describing their schtick as being “white guys that rapped”. A concept that was unheard of at that time. All three of ’em were dressed in matching windbreakers and ball caps. The Mets, if memory serves.

The event was the quintessential eighties experience. Every young Hollywood face was there, including the film’s cast, as well as members of the “Brat Pack” and its offshoots. I ran into Andrew McCarthy in the bathroom, coked out of his gourd.

Also on-hand was Molly Ringwald, dressed as what you might’ve described as a bag lady. Thick glasses, dark understated colors. Quite nineties, now that I think about it. Alternative in every sense. Ahead of her time, that one.

As you can maybe imagine, the Beasties were sticking out like sore thumbs against that Hollywood backdrop. Awkward, obnoxious, and very East Coast. But I’ll never forget that later out front, as people were leaving, Ad Rock was trying to talk to Ringwald. Loud, over-the-top, buggish. She seemed to be blowing him off, turning away, but he kept coming back at her. Back then we’d call it “scammin'”. 😀

I don’t know what they talked about, but after about a half hour of this scenario with Molly playing hard to get and Ad Rock not taking no for an answer, they eventually left in the same car.

THEN, a few weeks later, I was watching Letterman, and Ringwald was the guest. She came out dressed remarkably hip, urban, a polar opposite of the bag lady number that she was sporting weeks beforehand. While on the show, she explained that her new boyfriend was Ad Rock from the Beastie Boys. He’d totally landed her. Claire from the Breakfast Club.

I wish I had that night on VHS for you. Anyway, here’s a tune that EVERYBODY had bumping in their car in heavy rotation by the following summer:

UPDATE: Found an image on the web that was taken that winter 1987 night at the Chinese. I’m pretty sure they weren’t an item yet, but they did leave together: 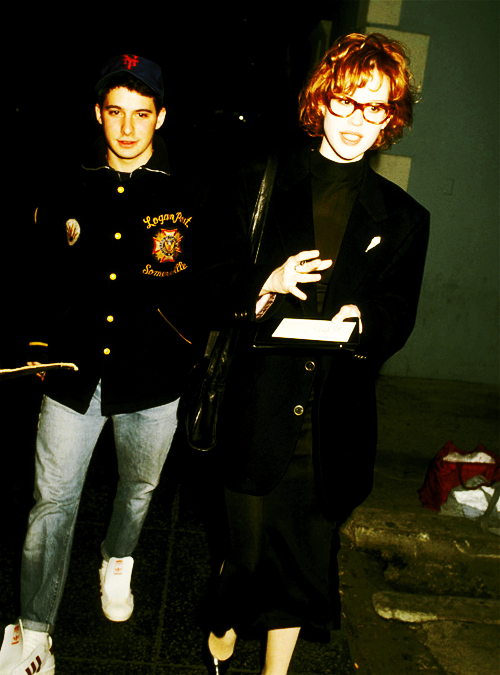 Next post: Some band named Coldplay jamming in my backyard

Previous post: Under Angels beater fresh off the press