My old man’s birthday present to me

I turn 42 years old next Monday, January 24. A couple weeks ago, my old man gave me a call and informed me that I’m now the age he was when I was a senior in high school.

After tripping on that concept together for a few moments, he said that he made me something for my birthday. With him living a couple hours away, we made tentative plans to meet halfway at some point in the next couple weeks. I received a text from him this morning, asking if we could hook up this afternoon before I leave for Vegas. He wanted to get something to me before Monday.

Syncing up our departure times, we planned to meet somewhere around the 91 and Beach Boulevard at about 2:30 PM. By the time 2:25 rolled around, he was ahead of me, and kept heading west, I east. We finally ended up crossing paths in La Palma, and hit some obscure Mexican restaurant called La Capilla.

After doing lunch, he asked the waitress if it was OK for him to “bring some stuff in”, which was apparently going to take up some room on the restaurant floor. She said it was fine. He ran out to the car and told me to close my eyes.

Once I got the go-ahead, I opened my eyes to see that he’d built two beautiful chairs and a custom folding table with a chessboard. 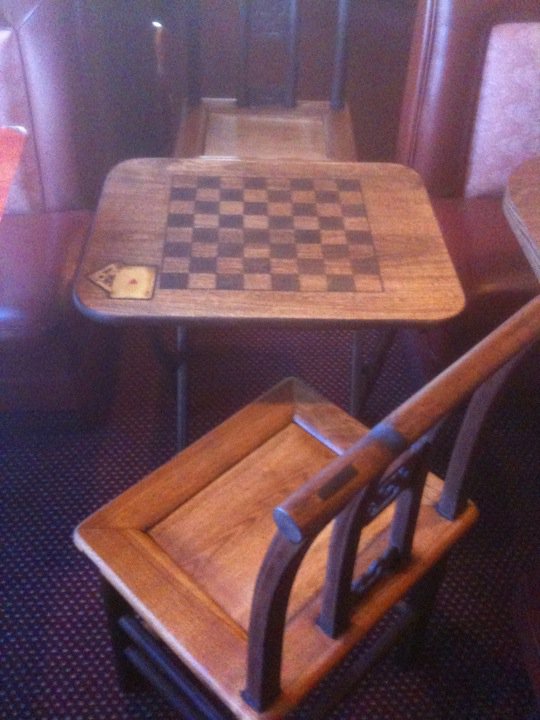 The chairs are antiques he’d found and refurbished; they’re super-solid, and he got ’em from some old Chinese couple who claim they’re as old as dirt. The table he made from scratch, and he even tracked down a set of Chinese chess pieces to fit the chairs. And for a personal touch, he included a Jack of Spades and Ace of Hearts, placing them under the table’s varnish. This “Ace with a J” logo is something I designed way back in the early nineties, and have it tattooed on my arm. I even did a Flash animation of it back in the day. It’s all based on my first name of Jace, which Pop came up with in 1969.

Pop’s a little miffed at himself for having the Ace of Hearts upside-down when compared to the tat, but I think that makes it even better. Variations, people. Variations. 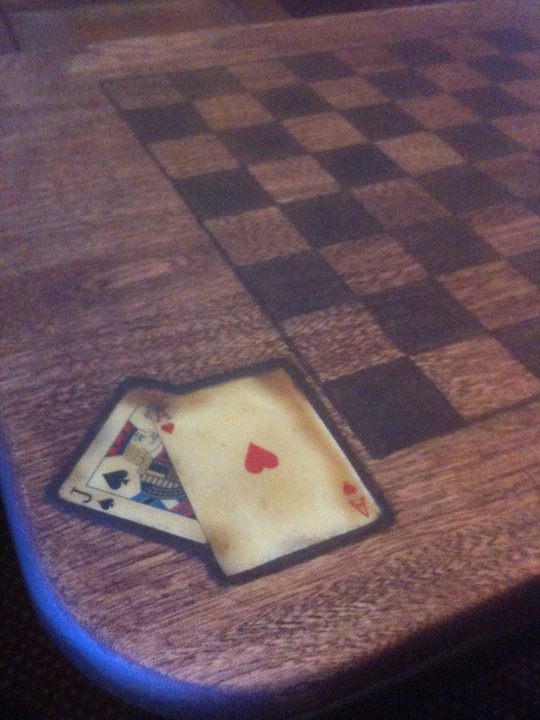 My old man’s always been a good craftsman, particularly with wood. A primal love for for woodworking is something we share. Pop’s got a woodshop with an ultimate set of tools, and is always in the middle of some sort of project. Today he confessed that — now that he’s officially retired — he’s going to be spending as much time as possible getting better at the craft. I suddenly tripped out, and thought of Under Angels, a story I wrote as a novel and screenplay.

This isn’t as tangential as it sounds. In Under Angels, Pete Durante is a war dog trainer and codebreaker during the World War II years. When the war finally ends, Pete hopes to retire from the crypto unit and settle down for a simpler civilian life as — get this — a woodworker. And he even makes chairs.

I’m not kidding. Below is an excerpt from Under Angels the novel, Chapter Ten. The scene takes place on V-J Day, Victory over Japan, September 2, 1946. The day marks the end of the war, and people across the country are partying in the streets. Pete has just come home to his wife Beatrice, and she has dinner ready.

Pete spun his fork in the marinara-drenched spaghetti, lanced a meatball, and shoved it in his mouth.

“I told him I want nothing to do with crypto anymore now that the war’s over. No more decoding, no more puzzles, no more breaking my brain over cryptic messages. Leaving it all behind. I’m a civilian now. Told him I’m going into woodworking full time.”

Pete was an excellent craftsman.

“We’ll settle down like we always talked about. No more secrets. I just got an order for another set of chairs from the guys at the club.”

Beatrice smiled, holding up her glass of water. “To new beginnings.”

Pete wiped his lips with his napkin and swallowed, grabbing his glass and holding it out to hers. “New beginnings, love. I like that.”

Bizarre, ain’t it? Making Pete a woodworker was not something I did consciously. Just goes to show how we tend to write what we know, whether we realize it or not. Perhaps this is why some feel a writer’s fiction isn’t worth reading until he’s well into his thirties.

BONUS MATERIAL: Just this morning I was slapping the djembe around and thinking about how I don’t really have the perfect place to sit while playing it. With the couch being too low, and the barstools obviously being too high, I need to strap into a harness and play the thing on my feet in order to get a proper angle. Problem solved. 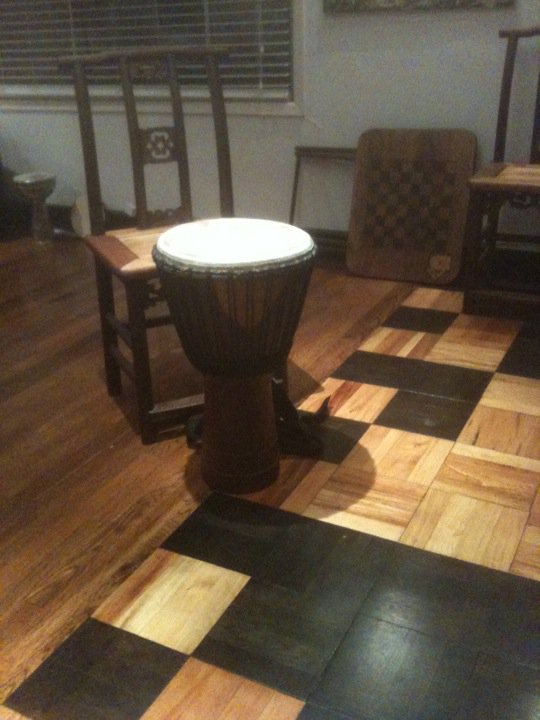 Thanks again, Pop. These are instant heirlooms, and I’ll cherish them forever. Love you tons. 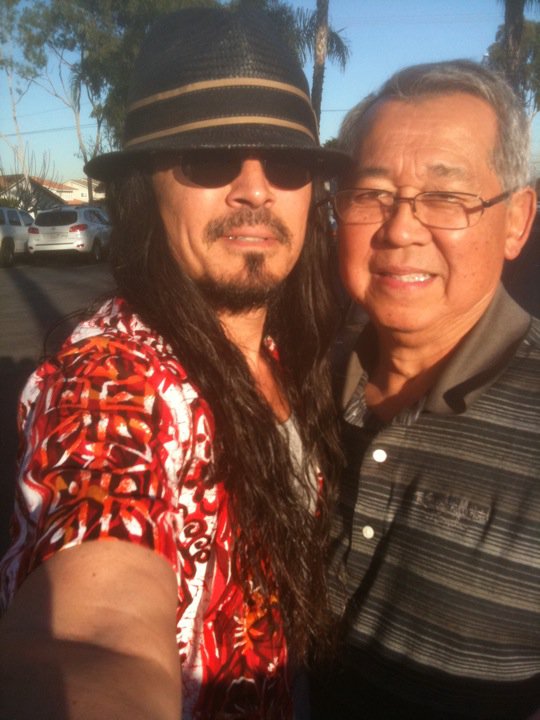