From the NY Times blog, a cool entry (the fifth in a series) that explores the skills needed to draw objects proportionally. The trick is to see the fundamental issues of the object as a whole rather than concentrating on its individual parts separately. 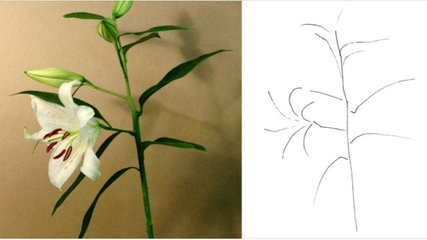 In the first stage of the drawing I establish the direction of the stems and leaves and the centers of the petals as they bend away from their core. Two things strike me as I make these lines — one, that the curves of the stems and leaves have a rhythmic relationship with one another and two, that the petals form an almost symmetrical “fountain” as they burst from their center.

In choosing to start my drawing in this way I have decided on a priority — that establishing the basic growing direction of each of the elements gives me a more coherent foundation on which to build my drawing than starting with any particular detail. This is an enormously important insight in drawing — if you start each observation of a subject by deciding what is most important to its character, you will know where to begin your drawing and how to proceed.