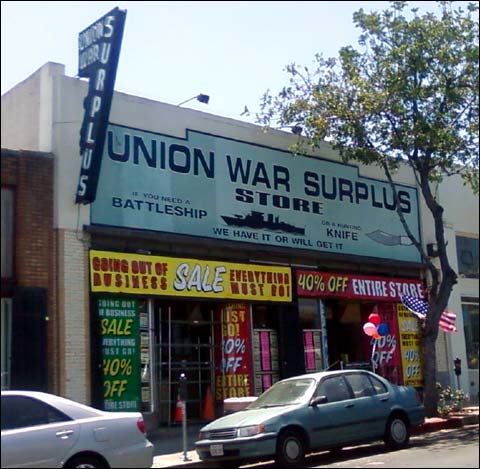 A piece of me died last week when I learned that Cheerful Al’s Union War Surplus Store, here on 6th Street in Downtown San Pedro a few blocks from the Los Angeles Harbor, is packing it up after over sixty years.

Over the years I’ve headed down to Union War for everything from fleece-lined Levi jackets to Navy peacoats to Dickies hoodies to long underwear to fedoras to used Army fatigues to canteens to sleeping bags. I even bought a butterfly knife there when I was a kid.

With signs on the front announcing 40% off everything until the doors close for good, I had to duck in there today for one last souvenir on my way up to the Farmers’ Market. Grabbed a pair of G.I. boots and a couple rucksacks. Just for the hell of it. Get in there while you can; I think they have a few mosquito nets left. Maybe even some dead grenades.

Union War. A classic that we’ll all miss. I’m just glad Pete was able to stock up on what he needed while he had the chance.