I just finished Dan Brown’s novel Angels & Demons, a twisting thriller taking us from New England to Switzerland, ultimately leading to the dark underbelly of Rome. Like The Da Vinci Code, the tale follows symbologist Robert Langdon on an adventure comprised of history, art, science, religion, fantasy, delicious irony, and facts, some of which are pretty bizarre. Among them would be the middle finger of Galileo, preserved with other artifacts at the Institute and Museum of the History of Science in Florence, Italy. 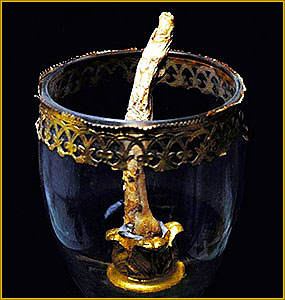 Galileo’s finger is on display at the Museo di Storia del Scienza in Italy. The finger was detached from Galileo’s body by Anton Francesco Gori (Florence, 1691-1757, literate and antiquary) on 12 March 1737 when Galileo’s remains were transferred from a small closet next to the chapel of Saints Cosmas and Damian to the main body of the church of Santa Croce where a mausoleum had been built by Vincenzo Viviani. Subsequently the finger was acquired by Angelo M. Bandini, the librarian of the Biblioteca Laurenziana and was exhibited for a long period in this library. Then, in 1841, it was brought to the Tribuna di Galileo, which had just been opened in the Museo di Fisica e Storia Naturale on the via Romana. Along with the instruments of the Medici and Lorraine dynasties, it eventually became the property of the Museo di Storia del la Scienza.

Look out for Ron Howard’s film adaptation of Angels & Demons in 2009, which will again include Tom Hanks as Robert Langdon. Ayelet Zurer (perfect choice!) will play Vittoria Vetra, and Ewan McGregor will become the late Pope’s understudy, Camerlengo Carlo Ventresca. What a character. Could be the role of a lifetime. I look forward to that performance.

PS: At the risk of trapping him in Typecast Corner, I would like to nominate Javier Bardem as the Hassassin.