My old man, Hall of Famer

My father’s always been very modest about his achievements in sports. If it weren’t for his mother, his sisters, his brother, his friends, and my mom, the rest of us would probably never know the truth. All my life, during my visits back to Hawaii, there would always be one of his buddies, known as Uncle Somebody, patting me on the head and telling me about what a stud my daddy was. Pop would usually just sit there with a shy smile on his face, never arguing.

I recently learned that Pop’s going back to Hawaii in April to be inducted into the Punahou Athletic Hall of Fame. So now, hey, Pop, YOU GOT NO MORE PLACE TO HIDE, BRAH.

Dad gave me a stack of newspaper clippings the other day, collectively commemorating this significant event. I’ve got lots of scanning to do, with plenty of inevitable blogging to follow. Included in these materials are letters of recommendation from his teammate and fellow inductee Norm Chow, complete with his NFL email address, and Mike Lum (Atlanta Braves, Cincinnati Reds, Chicago Cubs), who was on the California/Hawaii team of 14 that toured and competed in Japan. Mike batted fourth. Dad? Third.

As a teaser to lots more material to follow in the next few months, below is an article from the Punahou Bulletin announcing Pop’s 2008 induction. It wasn’t until today that I even knew Dad led the All League in hitting during the last two years of college. And, only because his big brother told me behind his back, Dad was being looked at hard by the San Francisco Giants before marriage and a baby took him in a different direction than professional baseball.

Part of me entertains the belief that I am personally responsible for preventing at least two San Francisco Giant World Championships in the seventies. Sorry, guys.

Needless to say, we’re all pretty damn proud of him. And that includes is dad and uncles. Grampa must have the hugest smile on his face right now. And he’s giggling, unsurprised.

I’ll be going back to the motherland to be there for the ceremony with camera in hand, there in Honolulu. Where it all went down, where I was conceived, and where I was born. Ain’t no way I’m missing this one. His legacy. Perhaps someday, long after Pop’s gone, I’ll be able to visit the Hall and say I was there the day he walked through the door. And I’ll remember how, unlike his yearbook photo below, he failed to hold back that perfect smile. 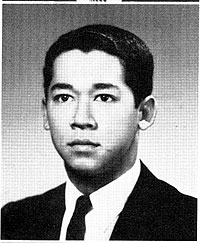 Those who knew Clint Albao ’63 on the field remember him not only for his personal athletic achievements, but for his exemplary leadership skills. He distinguished himself in baseball, basketball and football, garnering nine Varsity letters.

He was a three-year starter in baseball and one of only fourteen players selected from Hawai‘i and California to tour Japan. In basketball, he was a three-year Varsity starter, going to the state finals all three years. In football, he broke the ILH all-time pass reception and yardage record.

Doug Bennett, a member of the Hall of Fame selection committee, wrote, “What stands out most significantly was [Clint’s] impact and leadership in three different prime Varsity sports over three years. Not only was Clint a multiple- year 1st Team All-City/League performer in every sport, but he was also instrumental in leading those teams to multiple and/or undefeated state championships.”

After graduation, Clint continued to play baseball at Whittier College in California. He made the All-League in his junior year and went on to lead the league in hitting his last two years. Clint and wife Nancy Freeman ’63 Albao now live in Temecula, California.

BONUS: Some footage from the football game at a packed Honolulu Stadium in 1961 where Pop had five touchdown receptions. He’s the guy on the blue team doing everything. And my mom is the lead cheerleader. This footage lobs a certain existential trippiness to me personally that can’t really be explained words: