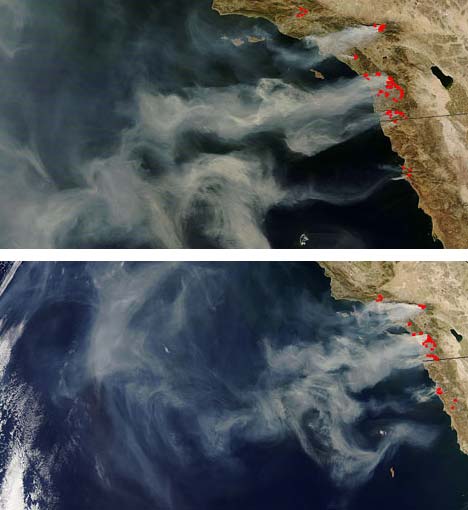 NASA satellites have obtained new images of the California wildfires, illustrating the immense scale of the blazes. The National Interagency Fire Center reports that 12 large, uncontained fires have burned over 335,000 acres in Southern California. The fires have continued to spread due to the fierce, dry Santa Ana winds.

These new NASA satellite images of the wildfires show the area between Los Angeles and San Diego, California. Fire activity is denoted with red pixels. Vast plumes of thick smoke can be seen blowing out over the Pacific Ocean.

According to the National Weather Service, a red-flag warning for extreme gusty winds is in effect for the Southern California area through 6:00 p.m. EST today. However, by Thursday, October 25th, the Santa Ana winds that have fueled the blazes should die out.