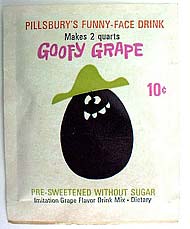 In 1965, our country wasn’t quite as culturally sensitive as it is today. That year, Pillsbury tried to cut into the profits of Kool-Aid with their own pre-sweetened drink mix, Funny-Face.

Each package of Funny-Face was to be added to two quarts of cold water, no sugar needed. Funny Face was potently sweetened with cyclamates, and the package weighed little more than a similar package of unsweetened Kool-Aid.

I’ve got memories of this stuff way in the back of my head. I probably caught the tail-end of it in the early seventies. If I could get Mom to pick up Funny-Face and a bottle of bubbles during our trip to the store, it was a good afternoon.

There were pictures of the character on the front of the packages. The characters were eventually deemed demeaning to their related ethnic groups, and a re-naming spree kicked in. Chinese Cherry became Choo Choo Cherry and Injun Orange became a portly Jolly Olly Orange. Lefty Lemon and Loud Mouth Lime were combined to make Lefty Lemon-Lime. 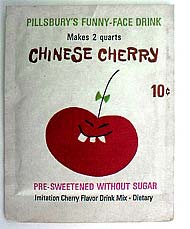 So let’s see if we can identify who was being offended with these playful powdered drink mascots.

Anyway, banning of cyclamates changed the Funny-Face formula. First was to sell it unsweetened, but people complained that they’d rather buy Kool-Aid. By the time Pillsbury added sugar to the mix, Kool-Aid had already regained the marginal lost market. (“Hey, Kool-Aid!”)

Previous post: Mermaid, Neptune, and a bunch of friends