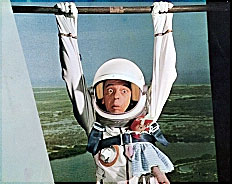 We’ve lost our beloved Mr. Furley, Barney Fife, and a number of other characters that’ve made me smile over the years in films like The Ghost and Mr. Chicken (“Atta boy, Luther!”), Hot Lead and Cold Feet, and Gus. Above is a pic from my personal favorite, The Reluctant Astronaut. Don’s plays grown man in the Cold Warrish ’60s, still living with his parents. In an effort to get him out of the house, they sign him up for NASA’s astronaut program behind his back. He gets accepted. The catch: he’s afraid of heights.

A true gift to our generation.