Back in the ’80s there was a song by Paul Hardcastle called “19”. The title represented the average age of the combat soldier in the Vietnam war:

Oliver Stone’s “Platoon” came out nineteen years ago today, which, coincidentally or not, was on the 19th of the month. I was seventeen years old that opening weekend, catching a Saturday matinee. I remember it being Christmastime at the mall. I, like any person who’s seen the film, was very moved by the experience. Being a few months into in my senior year of high school put me right around the age young American men were facing the reality of a military draft back in the late ’60s. This made the film that much more hard-hitting for me personally.

I happened to be a writer on the San Pedro High School newspaper at the time, and it was a no-brainer to review the film for both personal and academic reasons. I actually wrote the thing by hand with an Eraser Mate in a spiral notebook, bringing it to the typewriter afterwards.

Nineteen years ago today. It really doesn’t seem that long ago. Not long at all. Thinking about this number now gives me a whole new perspective on how young those guys really were back in the Nam. So incredibly young. Kids. Thrown into an unhealthy situation comparable to a year-long forced game of Russian Roulette. It’s not difficult to understand how this hellish experience could inflict such lasting psychological trauma on their still developing minds. They’ll always have a special place in my heart.

“Platoon”, the most recent movie about the Vietnam War, opened Dec. 19 and has opened eyes to a perspective of the war never before seen on film: the truth.

The film is directed by Oliver Stone and stars Charlie Sheen (“Red Dawn”, “Lucas”) and Tom Berenger (“Eddie and the Cruisers”, “The Big Chill”). On Wednesday, Feb. 11, “Platoon” tied “A Room With A View” for eight Oscar nominations including Best Picture, Best Director, and Best Supporting Actors Tom Berenger and Willem Dafoe, who, in all fairness, had starring roles rather than supporting roles.

Director Oliver Stone (“Scarface”, “Salvador”, and “The Hand”) actually served 15 months in the Vietnam War, and the movie is based on some of Stone’s Vietnam memories.

“Platoon” takes you far away from the world to join the 25th Infantry Division in 1968 deep down in the muddy combat zones of Vietnam. Unlike other Vietnam movies, “Platoon” illustrates how in the Vietnam jungle there were no villains, no heroes, only victims of the war expressing fear differently. The war was not a war to win, but to survive. Americans were not only fighting the unseen enemy, the were also fighting themselves. And they were losing.

“Someone once wrote: ‘Hell is the impossibility of reason.’ That’s what this place feels like. Hell. I hate it already and it’s only been a week. Some goddamn week, Grandma…I don’t even know what I’m doing.” –Private Taylor, Platoon

“Platoon” was filmed in the Philippine jungles. Actors were loaded down with 50 pound packs and instructed to march through the jungle, live off frozen meat patties and canned beans, and take no showers for two weeks before Stone allowed the cameras to start rolling. According to Stone, soldiers in war movies look suspicious. They’re not dirty enough, they don’t have callouses, and they look healthy. He wanted to get this bunch of actors and turn it into an infantry.

And this he did. The actors learned how to handle M-16’s, mines, bayonets, and grenades as if they were really going to use them. According to Tom Berenger, most of the actors lost between 15 and 25 pounds after two weeks of boot camp and 9 weeks of filming.

As far as realism is concerned, “Platoon” is nothing but. The fear, hate, confusion, frustration, anger, pity, and pain of war are all felt and understood in the movie. While watching “Platoon”, you can almost experience the stinging ants, buzzing mosquitos, and sucking leeches yourself. According to Steven Spielberg, “‘Platoon” makes you feel like you’ve visited Vietnam and never want to go back.”

As for entertainment, Ramboids will dig the movie. Plenty of bombs, bullets, and blood for the buck. But “Platoon” is actually more educational than it is entertaining. A very intense, depressing movie, it is not a movie you would take your girlfriend to for a good time.

Oliver Stone succeeded in putting a wide variety of stereotypes into this unique movie. The college student, the fat quiet country boy, the California surfer, the high school dropout from the gas station, the Mexican Catholic kid, and the black pusher from the street corner all came to Vietnam with a common denominator: to survive a war that to them had no meaning.

Stone also shows American soldiers as they have never so bluntly been shown before. Prevalent dope smoking, cold-blooded killings, and raping Vietnamese children may make the war seem anti-patriotic. But as someone once said, “One who knows not his own history is doomed to repeat it.” According to Stone, he wants vets to face up to the nightmare and be proud they came back. “So what if there was some bad in us?” Stone said. “That’s the price you pay.”

“Platoon”, a timeless piece of art, will be just as informative and powerful in many generations to come. It will explain a lot about what happened to Dad, Grandpa, Uncle Cip, and all the other Americans back in the ’60s in that place they call Vietnam.

More than a movie, “Platoon” takes Rambo off the Action Adventure shelf and puts him in the Science Fiction category where he belongs.

*Unbeknownst to the writer at the time, this review was submitted by the Fore n Aft editor to the 1987 California Statewide Journalism Competition. It won 3rd Place. 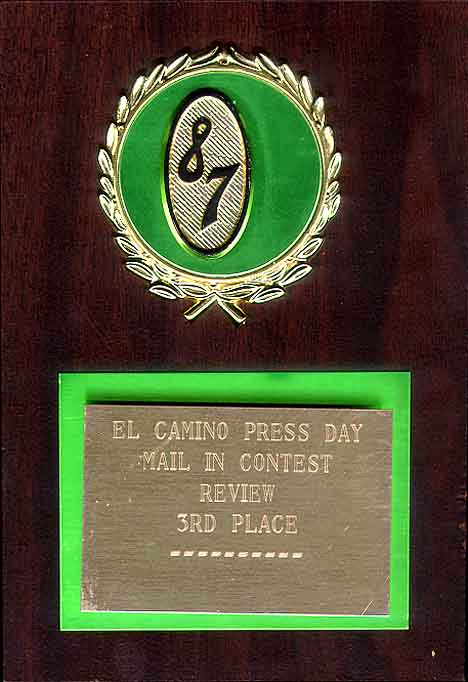 Next post: Why Puppy Owners Should Consider LASIK Surgery