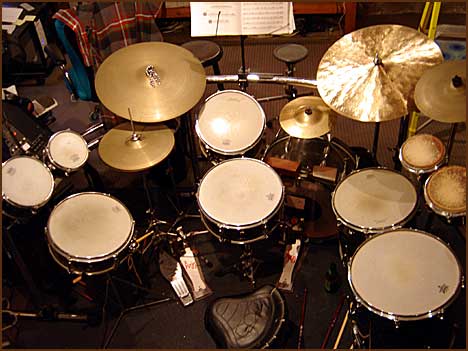 So here’s where we are today. It all started with the original 4-piece 1959 Slingerland Black Diamond Pearl kit (Chicago badge) I nabbed in the Recycler way back in the pre-ebay early nineties. An old man in Orange County — who played horn — was selling the kit out of his garage. It was apparently his recently deceased drummer buddy’s kit, and they played together at Disneyland for 40 years. I love the fact that there’s a chance I may have heard these instruments as a kid on any of the many days we spent at Diz.

First order of business was to pick up an old 20″ Zildjian ride from a pawn shop (now on the left with a dog choke chain on it for extra wash). The location of this is probably gonna move shortly.

Then broke out my Axis double pedal, which I’ve been using for electronic set ups for the last 13 years. Made of aircraft aluminum, no chains or sprockets. Love that thing; it’s my connection to the ground.

Next came a new snare drum, same vintage and finish, circa 1960 with a Chicago badge. The 13″ snare is now to the left of the hats.

Next came a pair of bongos, which I installed new skins on. Same approximate vintage, same finish. I’ve got them currently mounted on the right. I think that’s going to change.

Next came a couple of Slingy concert toms (6″ and 8″) that I found on ebay. Niles badge, probably from the ’70s. Currently mounted to the left of the hats in semi-experimental fashion. It’s really added some cool possibilities for the left hand. I’ve found it a little more intuitive to mount them in reverse order; it’s made more sense to go lower in pitch while playing from the center-out rather than left to right. We’ll see if that changes.

Next I found a 1961 Slingerland 16″ floor tom (Chigago era; matching straight legs as the 14″) with Gold Sparkle finish. I seized the opportunity do do my first re-wrap job. I picked up some BDP from Jammin’ Sam online and went for it. Borrowed a buddy’s heat gun and everything. I’m not sure if I’ll do that again. It came out fine, but the BDP is not quite exactly the same as the stuff they made back in the ’50s and ’60s.

Next came the ’50s Slingerland bell and china block unit, mounted on the bass drum.

Next I found a 22″ Sabian Vault Artisan Light ride, which I dig more each day.

Feeling a recent need for a way to use my old original L bar, I found a cut down Zildjian A Custom Fast Crash with a massive bell. Really interesting studies to be found there.

Can’t wait to see where I am in 2006. I’m itching to get the mambo bell and cha-cha bell thing happening, a tambourine, and some blocks. Who knows, maybe I’ll find room for my drumKat…