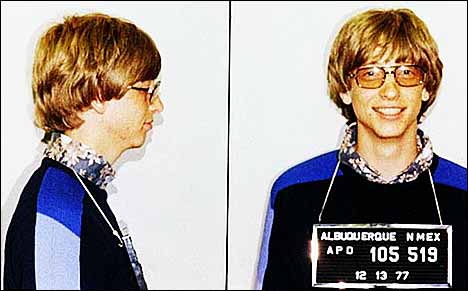 Microsoft boss Bill Gates was photographed by the Albuquerque, New Mexico police in 1977 after a traffic violation (details of which have been lost over time).

It wouldn’t be unsafe to presume that he had heard Debby Boone’s “You Light Up My Life” — the #1 song on the American charts that particular day — sometime over the course of that evening.

My personal guess is that he had the pedal to the metal, on his way to see Star Wars for the eleventh time with some buddies, when he was pulled over.

*Notice the very Microsoftish blue on his sweater, a color which he’s obviously fond of.